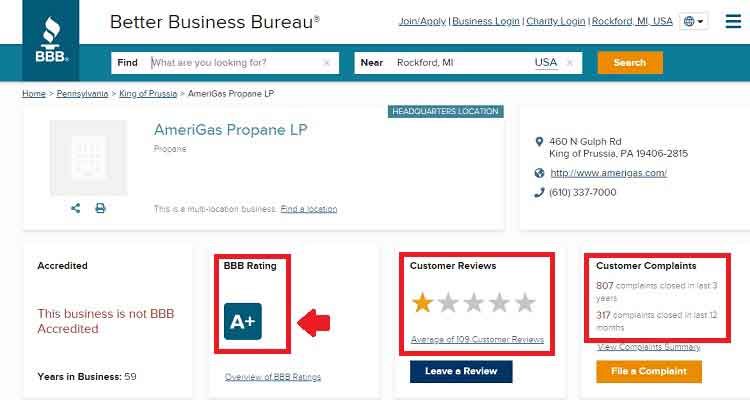 Who is Doing the Grading at the Better Business Bureau?

First a little background…I cancelled my propane service with Holton’s LP Gas (now Amerigas) on Monday, September 17th, 2018. When I called them to request a pick up their empty tank, I was told I would be put on the list but it was not a “top priority” for them. Well after several phone calls, emails and messages through their website, I still have the empty propane tank sitting in my yard — almost 10 weeks later!

Then what really surprised me was the grade that was given to Amerigas by the Better Business Bureau…you’d expect with a track record like that they might have a “D” or maybe a generous “C” grade. Nope! Amerigas has an “A+” BBB rating! What?! How does that happen?

So I thought it might be interesting to review the complaints to see what other customers were having problems with. Much to my surprise (not really!) most of the complaints on the BBB website say “Complaint Details Unavailable”…so now a person can’t even see the issues people are having.

How the BBB comes up with their ratings. They will tell you on their website. They base their rating on the following: the business’ complaint history with BBB, the type of business, the time in business, their transparent business practices, the company’s failure to honor commitments to BBB, Licensing and government actions known to BBB, and advertising issues known to BBB.

Without access to determine the relationship that Amerigas may have with the BBB, I figured I would look further at the BBB’s “business complaint history with the BBB” as it pertains to their ratings system… According to the BBB website,

Even though you can’t see what the complaints are about, most of them have been answered. Apparently as long as you respond to a complaint — regardless of the number of complaints or the low rating by actual customers — in the eyes of the BBB a company can still be an “A+” company! That is surprising to me.

So…my next step was to file a complaint on the BBB website with Amerigas. Here is the complaint I filed:

“I called the Cedar Springs, MI location to cancel my propane service with Amerigas on Monday, September 17th, 2018. I was told I would be put on the list, but it was not a top priority for them. After several phone calls, emails and messages sent through the Amerigas website…the empty propane tank is still sitting in my yard. It has been almost 10 weeks (2-1/2 months).

I had the tank placed in a location in my yard that was convenient for pickup during the fall months. It is not a convenient location for me, but I never figured it would take months for the tank to be picked up. With snow coming, this tank needs to be moved as it is in a location where snow will be plowed and the tank will be inaccessible.”

Stay tuned! I’ll keep you posted on the response that I get!