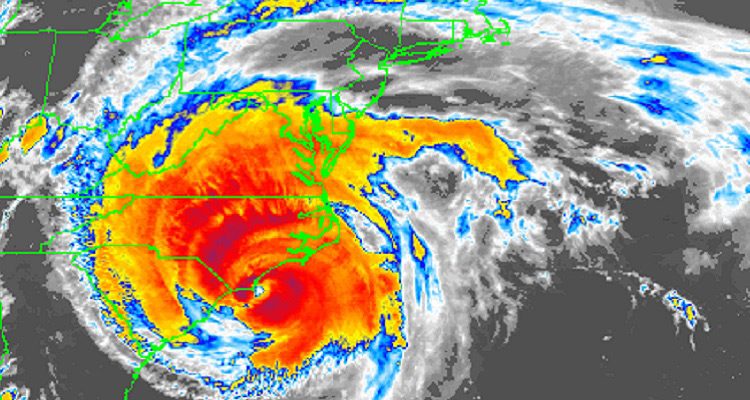 It looks like hurricane “Matthew” will be causing a few problems for Florida and the eastern coast of the United States.

According to Disney World’s website, they will be closed later today and be remained closed through Friday, October 7th, 2016. The message on their website reads:

“Based on the most recent forecasts for Hurricane Matthew, Walt Disney World theme parks, water parks, Disney Springs, miniature golf
courses and ESPN Wide World of Sports Complex will all be closed today by 5 p.m. and will remain closed through Friday, Oct. 7.

This is only the 4th time since it opened that Disney World has shut down, the three other times were also in preparation for hurricanes (Sept. 15, 1999, for Hurricane Floyd; Sept. 4 and 5, 1999, for Hurricane Frances and Sept. 26, 2004, for Hurricane Jeanne.) The park closed early on September 11, 2001 after the attacks, but they re-opened the following day from the information that I can find.

Part of me really would love to be down there to see this weather phenomenon in person. Then there is a part of me that says it’s too dangerous and I’m too old to be chasing hurricanes!

Back in September of 1996 (when Rick Beckett and I were at WGRD) I almost had a chance to chase a hurricane. It was hurricane “Fran” and it was making it’s way towards North Carolina.

After Rick and I had expressed our interest in chasing a hurricane on the radio, some of the staff thought “hey, this could be great radio!” (or they were just trying to get rid of us…I never really figured that part out!)

After several phone calls made by me and some members of our programming and sales teams, we had arranged airline tickets, a rental car, and hotel for two of us to stay in. I had been watching forecast reports and figured that a good spot to intercept the hurricane would be Wilmington, NC.

We both happened to be on vacation that Thursday and Friday. We were going to fly out the morning of Thursday, September 5th, 1996 down to Wilmington, NC. Our hotel was right on the coast. I had my bags packed and all the equipment that we were going to need. We were going to chase a hurricane!!!!

I made one mistake… Because Rick was living near where we had to pick up the airline tickets, I let him handle that task. I was going to pick him up has his apartment on Thursday morning and we would head to the airport for our journey southward!

However, that morning — after repeated attempts to contact Rick to make sure he was ready to go and had the tickets — we went no where. Rick wouldn’t answer his phone or return email. I knew there was no way he’d answer his door if I showed up and banged on it repeatedly. He was just avoiding me. He had the tickets and there was no way I could go without getting that ticket (I would have went without him). So I sat and watched as time ticked away, hoping that he’d call while we still had time to get to the airport. No such luck. Our hurricane chasing trip was a bust.

The following morning hurricane Fran made landfall near Cape Fear, NC (just south of Wilmington). I had nailed the best spot to be. She was a category 3 hurricane just before she hit land. There were sustained winds were at 155 mph. A 12 foot storm surge hit the coast…and I watched it all unfold on telelvision. Not a single strand of my hair was blown out of place. I didn’t have to deal with a single drop of rain.

Rick’s explanation of why he didn’t answer was just “I overslept”. Sure, tried to pass it off that way but I knew the real truth…RICK BECKETT HAD CHICKENED OUT!

So, I guess I’ll just watch “Matthew” the same way I watched “Fran”

Here is more on hurricane “Fran”.

Have you ever been in a hurricane? Share your experience by leaving me a message below…