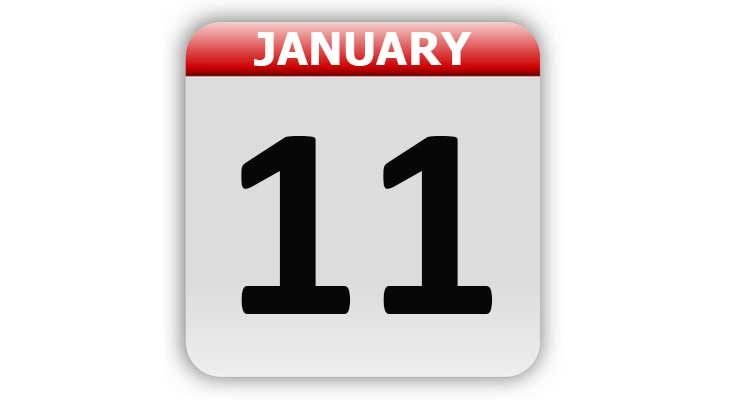 1770 – The first shipment of rhubarb was sent to the United States from London.

1805 – The Michigan Territory was created. It was made from the Indiana Territory and included Wisconsin and part of Minnesota. Michigan began operating as a State in 1835. Detroit was the first State Capital for land that extended all the way to the Mississippi River (the State’s present boundaries were set in 1837).

1813 – The pineapple was first brought to Hawaii. It wasn’t until 1899 that James D. Dole made an industry with it.

1861 – Alabama seceded from the United States.

1878 – In New York, NY, milk was delivered in glass bottles for the first time.

1902 – “Popular Mechanics” magazine was published for the first time.

1913 – The first sedan-type car, manufactured by the Hudson Motor Company, was unveiled at the National Automobile Show in New York, NY.

1922 – In Toronto, Canada, Leonard Thompson became the first person to be successfully treated with insulin.

1927 – Louis B. Mayer, head of film studio Metro-Goldwyn-Mayer (MGM) announced the creation of the Academy of Motion Picture Arts and Sciences, at a banquet in Los Angeles, CA.

1935 – Amelia Earhart became the first woman to fly solo from Hawaii to California.

1958 – The television show “Seahunt” debuted on CBS. It ran for four years.

1963 – The Whiskey-a-Go-Go nightclub opened in Los Angeles, CA. It was recognized as the first disco in the U.S.

1964 – U.S. Surgeon General Luther Terry, MD, published the landmark report “Smoking and Health: Report of the Advisory Committee to the Surgeon General of the United States” saying that smoking may be hazardous to health. It sparked national and worldwide anti-smoking efforts.

1973 – Owners of American League baseball teams voted to adopt the designated-hitter rule on a trial basis.

1983 – Bob Ross debuted on the PBS television show “The Joy of Painting”.

1994 – Sonny Bono declared his candidacy for a seat in Congress from Palm Springs, CA. He was elected that fall and served until his death in a 1998 skiing accident.

1995 – Michael Jackson released a statement saying, “I will no longer stand by and watch reckless members of the media try to destroy my reputation.” The statement was a response to rumors of a video depicting Jackson fooling around with a young boy.

1996 – The Space Shuttle Endeavor (STS-72) launched from Kennedy Space Center marking the start of the 74th Space Shuttle mission and the 10th flight of Endeavor.

2000 – The merger between AOL and Time Warner was approved by the U.S. government with restrictions to prevent a monopoly

2002 – Ford Motor Company announced plans to close five plants, the most drastic cutbacks in two decades with 35,000 layoffs and the elimination of four models.

National Step in a Puddle and Splash Your Friends Day