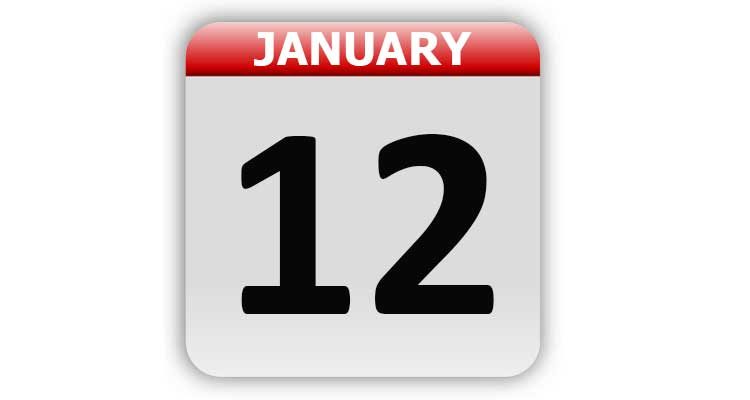 1773 – The first public museum in the United States was established in Charleston, SC.

1835 – Michigan’s acting Governor, Stephens T. Mason, addressed the Territory Legislative Council and said that Michigan had the “right” to become a State.

1875 – Rix Robinson, first white permanent settler in Kent County, died. He is buried in Ada, MI. After his trader days, he went on to be a U.S. Senator for Michigan.

1908 – A wireless message was sent long-distance for the first time from the Eiffel Tower in Paris.

1915 – The U.S. House of Representatives rejected a proposal to give women the right to vote.

1949 – “Kukla, Fran and Ollie”, the Chicago-based children’s television show, made its national debut on NBC.

1967 – Dr. James Bedford became the first person to be cryonically preserved with intent of future resuscitation.

1967 – The television show “Dragnet” returned to NBC after being off the network schedule for eight years.

1971 – The controversial television sitcom “All in the Family” premiered on CBS.

1986 – Space Shuttle Columbia (STS-61-C) blasted off with a crew that included the first Hispanic-American in space, Dr. Franklin R. Chang-Diaz. Also on board was Congressman Bill Nelson.

1991 – The U.S. Congress passed a resolution authorizing President George Bush to use military power to force Iraq out of Kuwait.

1997 – The animated television show “King of the Hill” debuted on FOX.

1999 – Mark McGwire’s 70th home run ball was sold at auction in New York for $3 million to an anonymous bidder.

1999 – President Bill Clinton paid $850,000 to end a legal action by a former Arkansas employee, Paula Jones, who had accused him of sexual misconduct.

2000 – The U.S. Supreme Court, in a 5-4 ruling, gave police broad authority to stop and question people who run at the sight of an officer.

2005 – NASA launched “Deep Impact”. The spacecraft was planned to impact on Comet Tempel 1 after a six-month, 268 million-mile journey.

2006 – The U.S. Mint released new nickels with an image of Thomas Jefferson taken from a 1800 Rembrandt Peale portrait. Jefferson is looking forward…since 1909, when Presidents were first depicted on circulating coins, they all had been shown in profile.

2010 – An estimated 316,000 die after a huge earthquake in Haiti near its capital city, Port-au-Prince. The quake destroyed most of the city, and according to The Red Cross about three million people were affected by the catastrophe.