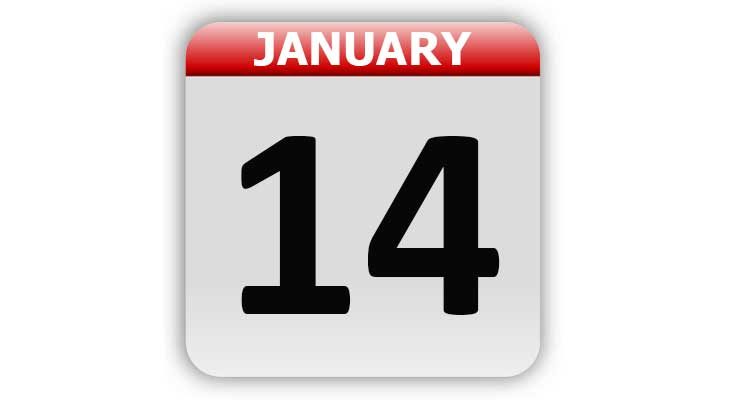 1784 – The United States ratified a peace treaty with England ending the Revolutionary War.

1882 – The Myopia Hunt Club, in Winchester, MA, became the first country club in the United States.

1943 – President Franklin D. Roosevelt became the first President to fly in an airplane while in office. He flew from Miami, FL, to French Morocco where he met with British Prime Minister Winston Churchill to discuss World War II.

1972 – Elvis Presley’s concert “Aloha from Hawaii” was broadcast live via satellite. It was the most watched broadcast by an individual entertainer in television history.

1973 – The Miami Dolphins defeated the Washington Redskins in Super Bowl VII and became the first NFL team to go undefeated in a season.

1998 – Whitewater prosecutors questioned Hillary Rodham Clinton at the White House for 10 minutes about the gathering of FBI background files on past Republican political appointees.

1998 – In Dallas, researchers report an enzyme that slows the aging process and cell death.

2005 – A probe, from the Cassini-Huygens mission, sent back pictures during and after landing on Saturn’s moon Titan. The mission was launched on October 15, 1997.

Shannon Lucid – 79 years old (1943) – Astronaut (She held the record for the longest duration stay in space by an American, as well as by a woman. She is the only American woman to serve aboard Mir.)

Lawrence Kasdan – 73 years old (1949) – Screenwriter, director, producer (“The Empire Strikes Back”, “Raiders of the Lost Ark”, “Return of the Jedi”, “Star Wars: The Force Awakens”, “The Big Chill”, “Grand Canyon”, “The Accidental Tourist”). Graduated from the University of Michigan.

National Dress Up Your Pet Day