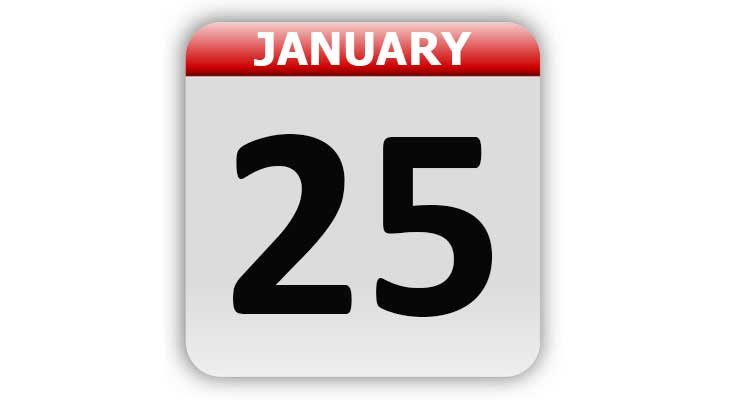 1858 – Mendelssohn’s “Wedding March” was presented for the first time at the wedding of the daughter of Queen Victoria and the Crown Prince of Prussia.

1881 – Thomas Edison, Alexander Graham Bell and others signed an agreement to organize the Oriental Telephone Company.

1890 – The United Mine Workers of America was founded.

1922 – Chocolate covered ice cream on a stick was patented. Originally called the “I-Scream Bar”, it later became the “Eskimo Pie”.

1924 – The first Winter Olympic Games began in Chamonix in the French Alps. The only U.S. gold medal is won by Charles Jewtraw, who finished first in the men’s 500 meter speed skating competition. The five original sports were: bobsleigh, curling, ice hockey, Nordic skiing, and skating.

1949 – The first Emmys were presented at the Hollywood Athletic Club.

1959 – American Airlines had the first scheduled transcontinental flight of a Boeing 707.

1971 – Charles Manson and three of his female followers were convicted of seven 1969 murders.

1981 – The 52 Americans held hostage by Iran for 444 days arrived back in the United States and were reunited with their families.

1994 – Michael Jackson reached an out of court settlement with the family of a 13 year old boy he was accused of molesting.

1995 – Johnnie Cochran made his opening statement for the defense at the O.J. Simpson trial.

1999 – In Louisville, KY, a man received the first hand transplant in the United States.

2004 – The second Mars rover, the Opportunity (MER-B), landed on the red planet and sent pictures back to Earth. Opportunity has continued to move, gather scientific observations, and report back to Earth for over 50 times its designed lifespan. As of January, 2017, the rover had traveled over 27 miles on the surface of Mars.

2005 – The first winner of the reality television show “Survivor”, Richard Hatch, was arraigned in Providence, RI, on tax evasion charges.

2010 – In Arlington, TX, the International Bowling Museum and Hall of Fame had its grand opening.

2010 – The band KISS rang the closing bell at the New York Stock Exchange.

A Room Of One’s Own Day

Tags: A Look Back, Celebrity Birthdays, Days of the Year, January 25, Today in History