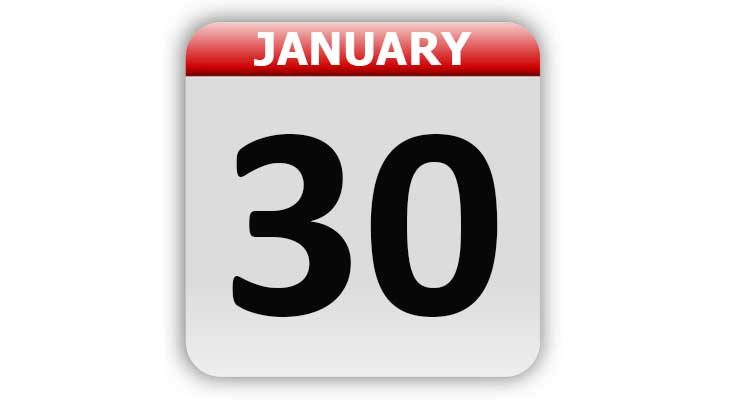 1798 – The first brawl in the U.S. House of Representatives took place. Congressmen Matthew Lyon and Roger Griswold fought on the House floor.

1894 – C.B. King received a patent for the pneumatic hammer.

1911 – The first airplane rescue at sea was made by the destroyer “Terry”. Pilot James McCurdy was forced to land in the ocean about 10 miles from Havana, Cuba.

1933 – “The Lone Ranger” radio program was presented for the first time on Detroit, MI radio station WXYZ. The program ran for 2,956 episodes and ended in 1955. WXYZ also produced “The Green Hornet” and “Sgt. Preston of the Yukon”.

1958 – The first two-way moving sidewalk was put in service at Love Field in Dallas, TX. The length of the walkway through the airport was 1,435 feet.

1962 – Two members of the “Flying Wallendas” high-wire act were killed when their seven-person pyramid collapsed during a performance in Detroit, MI.

1964 – NASA launched Ranger 6. The unmanned spacecraft carried television cameras and was intentionally crash-landed on the moon. The cameras did not return any pictures to Earth.

1969 – The Beatles made their last-ever public appearance as a group on the roof of Apple Records in London. The performance of “Get Back” was filmed for the movie “Let It Be”.

1973 – The band KISS played their first ever show to about ten people in Queens, NY.

1976 – George Herbert Walker Bush became the director of the CIA.

1995 – Researchers from the U.S. National Institutes of Health announced that clinical trials had demonstrated the effectiveness of the first preventative treatment for sickle cell anemia.

2003 – Richard Reid was sentenced to life in prison for trying, in December 2001, to blow up a plane with explosives hidden in his shoes.

2005 – In Iraq, the first free Parliamentary elections since 1958 took place.

Dick Cheney – 81 years old (1941) – Politician (Served as the White House Chief of Staff, in Congress, as Secretary of Defense and then was Vice President under George W. Bush)

Tags: A Look Back, Celebrity Birthdays, Days of the Year, January 30, Today in History