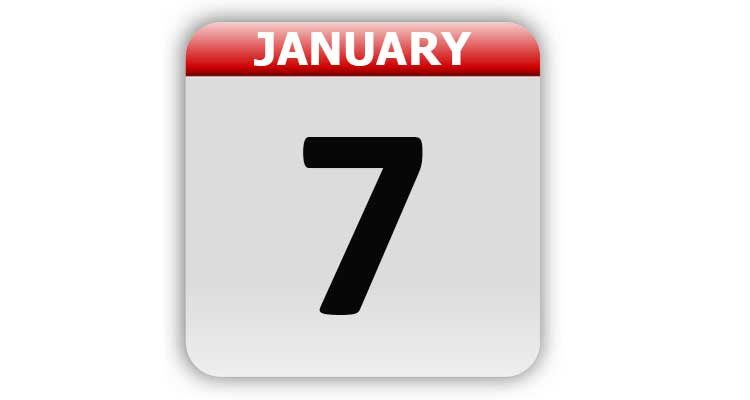 1782 – The Bank of North America opened in Philadelphia, PA. It was the first commercial bank in the United States.

1789 – Americans voted for the electors that would choose George Washington to be the first President of the United States.

1887 – The Grand Rapids Hand Screw Company was incorporated. They manufactured wood clamps for the furniture industry.

1887 – Thomas Stevens completed the first worldwide bicycle trip. He started his trip in April 1884. Stevens and his bike traveled 13,500 miles. It took him almost 3 years.

1927 – The Harlem Globetrotters played their first game, in Hinkley, IL.

1949 – The announcement of the first photograph of genes was shown at the University of Southern California in Los Angeles, CA.

1950 – Chevrolet introduced its first automatic transmission – the “Powerglyde”. They sold 300,000 the first year.

1953 – President Harry Truman announced the development of the hydrogen bomb.

1954 – The Duoscopic TV receiver was unveiled. The TV set allowed the watching of two different shows at the same time.

1965 – On the television show “My Three Sons”, William Frawley made his last appearance as “Bub”, Fred MacMurray’s father-in-law and grandfather-housekeeper-nanny for the boys. The 78 year old Frawley was ailing and was written out of the show. The next week, “Charlie” (played by William Demarest) arrived to step into his shoes.

1968 – Surveyor 7, the last spacecraft in the Surveyor series, lifted off from Cape Canaveral, FL.

1970 – Max Yasgur was sued for $35,000 in property damages by neighboring farmers. It was Yasgur’s property on which the August 1969 Woodstock Festival was held.

1980 – President Jimmy Carter signed legislation that authorized $1.5 billion in loans for the bailout of the Chrysler Corporation.

1990 – The Leaning Tower of Pisa was closed to the public. The accelerated rate of “leaning” raised fears for the safety of its visitors.

1998 – Former White House intern Monica Lewinsky signed an affidavit denying that she had an affair with President Bill Clinton.

1999 – President Bill Clinton went on trial before the Senate. It was only the second time in U.S. history that an impeached President had gone to trial. Clinton was later acquitted of perjury and obstruction of justice charges.

2002 – Microsoft Corp. chairman Bill Gates introduced a new device code named Mira. The device was tablet-like and was a cross between a handheld computer and a TV remote control.

I’m Not Going To Take It Anymore Day

Tags: A Look Back, Celebrity Deaths, Days of the Year, January 7, Today in History