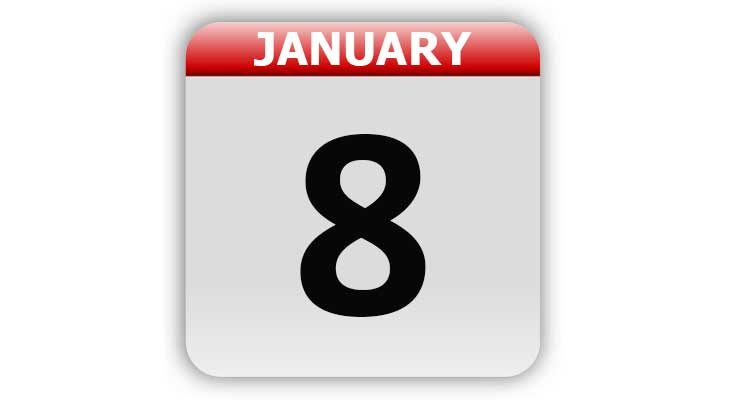 1675 – The first corporation was chartered in the United States. The company was the New York Fishing Company.

1835 – The United States national debt was zero for the only time.

1838 – Alfred Vail demonstrated a telegraph code he had devised using dots and dashes as letters. The code was the predecessor to Samuel Morse’s code.

1877 – Crazy Horse (Tashunca-uitco) and his warriors fought their final battle against the Cavalry in Montana.

1901 – The first tournament sanctioned by the American Bowling Congress was held in Chicago, IL.

1929 – William S. Paley appeared on CBS Radio for the first time to announce that CBS had become the largest regular chain of broadcasting chains in radio history.

1963 – Leonardo da Vinci’s “Mona Lisa” was exhibited in the U.S. for the first time at the National Gallery of Art in Washington, DC.

1973 – The trial of seven men accused of bugging Democratic Party headquarters in the Watergate complex opened in Washington, DC.

1982 – American Telephone & Telegraph (AT&T) settled the Justice Department’s anti-trust lawsuit against it by agreeing to divest itself of the 22 Bell System companies.

1982 – The U.S. Justice Department withdrew an anti-trust suit against IBM.

1985 – The Post Office issued a set of Elvis Presley stamps to mark the 50th anniversary of his birth.

1987 – The Dow Jones industrial average closed over the 2000 mark for the first time.

1993 – An Elvis Presley commemorative stamp was debuted by the U.S. Postal Service. The 29-cent stamp showed the likeness of the 1950’s era Elvis.

1993 – The fantasy comedy slasher film “Leprechaun” premiered in theaters. It was Jennifer Aniston’s film debut. (I wonder if she puts that on her résumé?)

1997 – Mister Rogers (Fred Rogers) received a star on the Hollywood Walk of Fame.

1998 – Ramzi Yousef was sentenced to life in prison for his role of mastermind behind the World Trade Center bombing in New York.

1998 – Scientists announced that they had discovered that galaxies were accelerating and moving apart and at faster speeds.

2002 – President George W. Bush signed into law the No Child Left Behind Act.

2004 – The RMS Queen Mary 2, the largest passenger ship ever built, was christened by her namesake’s granddaughter, Queen Elizabeth II.

2005 – The nuclear sub USS San Francisco collided at full speed with an undersea mountain south of Guam. One man was killed, but the sub surfaced and was repaired.

2009 – In Egypt, archaeologists entered a 4,300 year old pyramid and discovered the mummy of Queen Sesheshet.

2011 – Arizona congresswoman Gabrielle Giffords was shot while talking with constituents at a Tucson grocery store by 22 year old Jared Lee Loughner. Although she miraculously survived being shot in the head, six others were killed.

2016 – Joaquín Guzmán, widely regarded as the world’s most powerful drug trafficker, was recaptured following his escape from a maximum security prison in Mexico

Sarah Polley – 43 years old (1979) – Actress (“Exotica”, “The Sweet Hereafter”, Guinevere, Go, The Weight of Water, My Life Without Me, The Adventures of Baron Munchausen, Dawn of the Dead, Splice, and Mr. Nobody.

Tags: A Look Back, Celebrity Birthdays, Days of the Year, January 8, Today in History