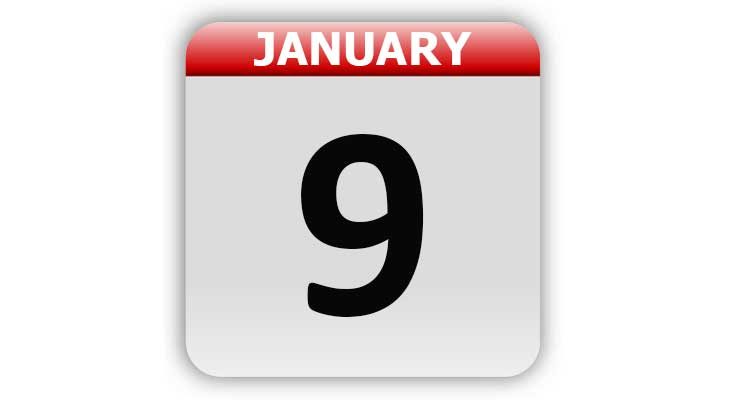 1788 – Connecticut became the 5th state to be admitted to the United States.

1793 – Jean-Pierre Blanchard became the first person to fly a balloon in the United States.

1861 – The state of Mississippi became the second state to secede from the Union before the outbreak of the Civil War.

1937 – The first issue of “Look” magazine went on sale. Within a month, “Look” became a biweekly magazine.

1940 – Television was used for the first time to present a sales meeting to convention delegates in New York, NY.

1959 – The television show “Rawhide”, with a young Clint Eastwood in its cast, debuted on CBS.

1969 – The supersonic airplane, the Concorde, made its first trial flight.

1972 – The ocean liner Queen Elizabeth was destroyed by fire in Hong Kong harbor.

1984 – Clara Peller was first seen by television viewers in the “Where’s the Beef?” commercial campaign for Wendy’s.

1986 – Kodak abandons the instant camera business after 10 years due to a loss in a court battle that claimed that Kodak copied patents owned by Polaroid.

1995 – Russian cosmonaut Valeri Poliakov completed his 366th day in outer space aboard the Mir space station. That amount of time broke the record for the longest continuous time spent in outer space.

1999 – The first official set of 102 Pokemon Trading Cards was released.

2002 – The U.S. Justice Department announced that it was pursuing a criminal investigation of Enron Corp. The company had filed for bankruptcy on December 2, 2001.

2003 – Archaeologists announced that they had found five more chambers in the tomb of Qin Shihuang, China’s first emperor. The rooms were believed to cover about 750,000 square feet.

2006 – Matthew Broderick and Nathan Lane both received stars on the Hollywood Walk of Fame in a dual ceremony.

2011 – We were introduced to the Belchers when the animated TV show “Bob’s Burgers” premiered on TV.

2013 – A SeaStreak ferry traveling to lower Manhattan, NY, crashed into the dock and injured 85 people.

Tags: A Look Back, Celebrity Birthdays, Days of the Year, January 9, Today in History