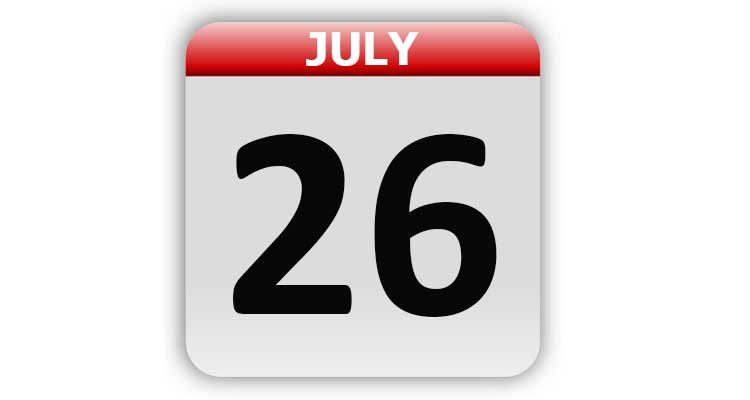 1775 – Benjamin Franklin became the first Postmaster General when a postal system was established by the 2nd Continental Congress of the United States.

1881 – Thomas Edison and Patrick Kenny applied for a patent for a facsimile telegraph.

1883 – The largest log jam in the nation threatened Grand Rapids, MI. Heavy rains cause the Grand River to rise nearly 20″. Lumberman used the high water to help bring their logs down river. The logs broke loose and 150 million board feet of timber came roaring down the river. It was one of the largest log jams in history, Logs piled up thirty feet deep and seven miles long. Two railroad bridges at Fulton and Wealthy Street were destroyed by the pressure of the jam.

1948 – Babe Ruth was seen by the public for the last time. He was attending the New York City premiere of the motion picture, “The Babe Ruth Story”.

1971 – Nicolette Milnes-Walker completed sailing non-stop single-handedly across the Atlantic Ocean, becoming the first woman to successfully do so.

1971 – Apollo 15 landed on the Moon. It was the first Apollo “J-Mission” and the first use of a Lunar Roving vehicle.

2005 – The STS-114 Mission – Launch of Discovery, was NASA’s first scheduled flight mission after the Columbia disaster in 2003.

National All or Nothing Day

Tags: A Look Back, Celebrity Birthdays, Days of the Year, July 26, Today in History