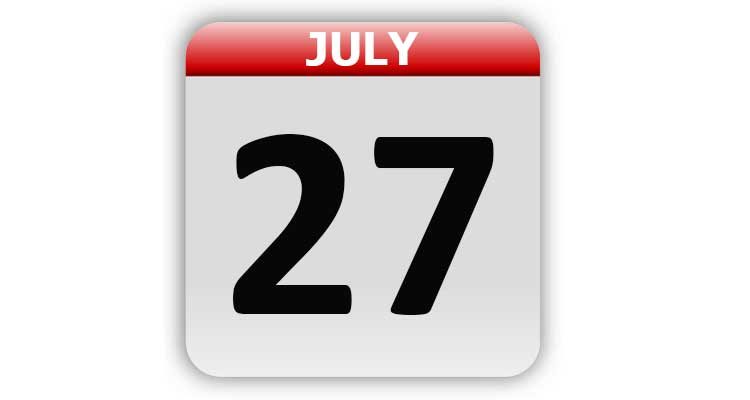 1909 – Orville Wright set a record for the longest airplane flight. He was testing the first Army airplane. He was in the air 72 minutes.

1965 – The Federal Cigarette Labeling and Advertising Act was signed into law. The law required health warnings on cigarette packages.

1980 – The upper tail of an earthquake centered in Kentucky hit Michigan. The earthquake was felt in Allegan, Coldwater, Flint, Hastings, and Mount Pleasant. During the fifth inning of a ball game at Tiger Stadium, the upper levels swayed.

1995 – The Korean War Veterans Memorial was dedicated in Washington, DC.

1996 – In Atlanta, GA, a pipe bomb exploded at Centennial Olympic Park during the 1996 Summer Olympics. One woman was killed and a cameraman suffered a heart attack trying to flee the scene. 111 were injured.

1999 – The U.S. Space Shuttle Discovery completed a five-day mission. It was commanded by Air Force Col. Eileen Collins. She was the first woman to command a Shuttle mission.

2003 – It was reported by the BBC (British Broadcasting Corp.) that there is no monster in Loch Ness. 600 sonar beams and satellite navigation technology were used in the investigation. Sightings of “Nessie” go back to the 6th century.

2005 – NASA grounded the Space Shuttle, pending an investigation of the problem of the shedding foam insulation from the external fuel tank.

2012 – The opening ceremonies for the 2012 Summer Olympics took place at the Olympic Stadium in London, England.

Take Your Houseplant for a Walk Day

Tags: A Look Back, Celebrity Birthdays, Days of the Year, July 27, Today in History