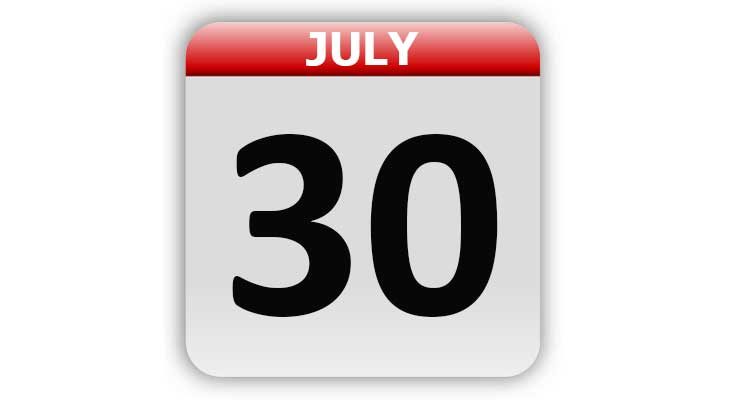 1894 – Corn Flakes were invented. The cereal was created by John Harvey Kellogg as a food that he thought would be healthy for the patients of the Battle Creek, MI, Sanitarium, where he was superintendent.

1932 – Walt Disney’s “Flowers and Trees” premiered. It was the first Academy Award winning cartoon. It was also the first cartoon short to use Technicolor.

1942 – The Women’s Accepted for Volunteer Emergency Service was created by legislation signed by President Franklin D. Roosevelt. The members of the WAVES were a part of the U.S. Navy.

1945 – The USS Indianapolis was torpedoed by a Japanese submarine. The ship had just delivered key components of the Hiroshima atomic bomb to the Pacific island of Tinian. Only 316 out of 1,196 men aboard survived the attack.

1954 – Elvis Presley made his professional debut in Memphis, TN. It was his first concert to be advertised.

1956 – President Dwight Eisenhower approved a Joint Resolution of Congress which made “In God We Trust” the national motto of the United States. The motto has been in continuous use on the penny since 1909, on the dime since 1916 and on all silver dollars, half-dollar coins and quarters since 1908.

1965 – President Lyndon Johnson signed into law the Social Security Act that established Medicare and Medicaid. It went into effect in 1966.

1971 – David Scott and James Irwin landed on the moon with Apollo 15 and the Lunar Module Falcon along with the first Lunar Rover.

1974 – The House of Representatives Judiciary Committee voted to impeach President Richard Nixon for blocking the Watergate investigation and for abuse of power.

1974 – President Richard Nixon released subpoenaed White House recordings after being ordered to do so by the Supreme Court.

1975 – Jimmy Hoffa disappeared from the parking lot of the Machus Red Fox restaurant in Bloomfield Hills, MI, a suburb of Detroit, at about 2:30 pm. He was never seen or heard from again. He was declared legally dead on this date in 1982.

1990 – The first Saturn automobile rolled off the assembly line In Spring Hill, TN

2001 – Lance Armstrong became the first American to win the Tour de France for a third time.

2003 – In Mexico, the last ‘old style’ Volkswagon Type 1 Beetle rolled off an assembly line after more than 21 million were manufactured over 65 years.

International Day Against Trafficking in Persons

Tags: A Look Back, Celebrity Birthdays, Days of the Year, July 30, Today in History