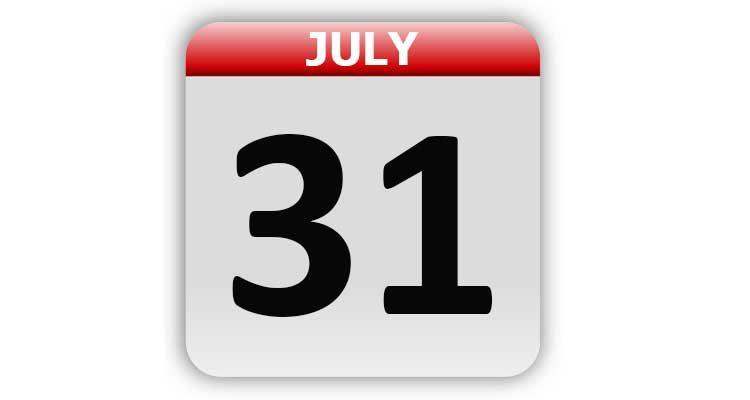 1790 – The first U.S. patent was issued to inventor Samuel Hopkins for a potash process.

1792 – The cornerstone of the U.S. Mint in Philadelphia, PA, was laid. It was the first building to be used only as a government building.

1955 – Marilyn Bell of Toronto, Canada, became the youngest person to swim the English Channel at the age of 17.

1964 – The American space probe Ranger 7 transmitted pictures of the moon’s surface. The images were 1,000 times clearer than anything ever seen from earth-bound telescopes.

1971 – Apollo 15 astronauts become the first to ride in a vehicle on the moon in a lunar rover vehicle.

1981 – The seven-week baseball players’ strike came to an end when the players and owners agreed on the issue of free agent compensation.

1984 – Leeza Gibbons made her first appearance on TV’s “Entertainment Tonight”.

1989 – The Game Boy handheld video game was released in the U.S.

1998 – Nicolas Cage received a star on the Hollywood Walk of Fame.

1999 – The spacecraft Lunar Prospect crashed into the moon. It was on a mission to detect frozen water on the moon’s surface. The craft had launched on January 6, 1998.

2006 – Cuba’s Fidel Castro handed over power to his brother, Raul.

2012 – Michael Phelps broke the record set in 1964 by Larisa Latynina for the most medals won at the Olympics.

Tags: A Look Back, Celebrity Birthdays, Days of the Year, July 31, Today in History