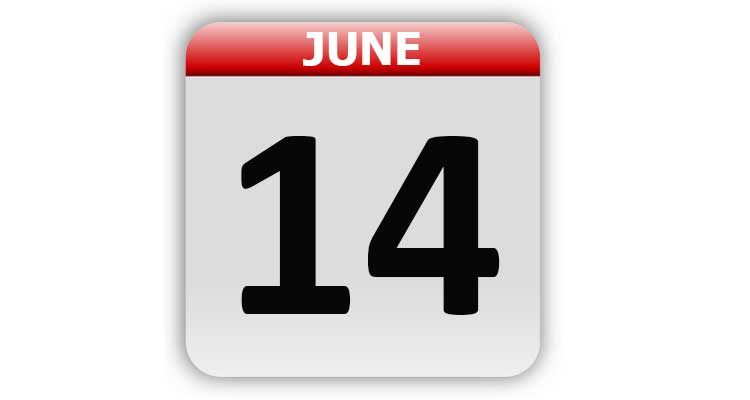 1775 – The Continental Army was founded by the Second Continental Congress. This is considered to be the birth of the United States Army. On June 15, George Washington was appointed commander-in-chief.

1777 – The Continental Congress in Philadelphia, PA adopted the “Stars and Stripes” as the national flag of the United States. The Flag Resolution stated “Resolved: that the flag of the United States be made of thirteen stripes, alternate red and white; that the union be thirteen stars, white in a blue field, representing a new Constellation.” On May 20, 1916, President Woodrow Wilson officially proclaimed June 14 “Flag Day” as a commemoration of the “Stars and Stripes.”

1789 – Whiskey distilled from maize was first produced by clergyman Rev. Elijah Craig. It was called Bourbon because Craig lived in Bourbon County, KY.

1789 – HMS Bounty mutiny survivors, including Captain William Bligh and 18 others, reached Timor after a nearly 4,600 mile journey in an open boat.

1837 – The first steamboat was dropped into the channel at Grand Rapids, MI for service on the Grand River. It was called the Governor Mason and was constructed of lumber taken from land owned by the Campau’s within the original plot of Grand Rapids.

1881 – Ephraim Shay, of Cadillac, MI, received a patent for a geared steam engine that went on to be highly successful.

1922 – Warren G. Harding became the first President to be heard on radio. The event was the dedication of the Francis Scott Key Memorial at Fort McHenry.

1943 – The U.S. Supreme Court ruled that school children could not be made to salute the U.S. flag if doing so conflicted with their religious beliefs.

1951 – “Univac I” was unveiled. It was a computer designed for the U.S. Census Bureau and billed as the world’s first commercial computer.

1952 – The first nuclear powered submarine, The Nautilus, was dedicated.

1954 – President Dwight D. Eisenhower signed an order adding the words “under God” to the Pledge of Allegiance. READ MORE.

1959 – The first daily operating monorail system in the Western Hemisphere, the Disneyland Monorail System, opened to the public in Anaheim, CA.

1967 – Mariner 5 was launched from Cape Kennedy, FL. The space probe’s flight took it past Venus.

1990 – The U.S. Supreme Court upheld police checkpoints that are used to examine drivers for signs of intoxication.

1995 – Michael Jackson appeared on TV, with his wife Lisa Marie Presley, in a live interview with Diane Sawyer on “Prime Time Live”. Sawyer interviewed Jackson about accusations of child molestation against him.

1996 – The movie “The Cable Guy”, starring Jim Carrey and Matthew Broderick, premiered in theaters. It was directed by Ben Stiller.

2002 – Actor Kirk Douglas received the UCLA Medal. The award is presented to people for cultural, political and humanitarian achievements.

2019 – The Toronto Raptors won the NBA Championship over the Golden State Warriors in game six by a score of 114-110.

Tags: A Look Back, Celebrity Birthdays, Days of the Year, Flag Day, June 14, Today in History