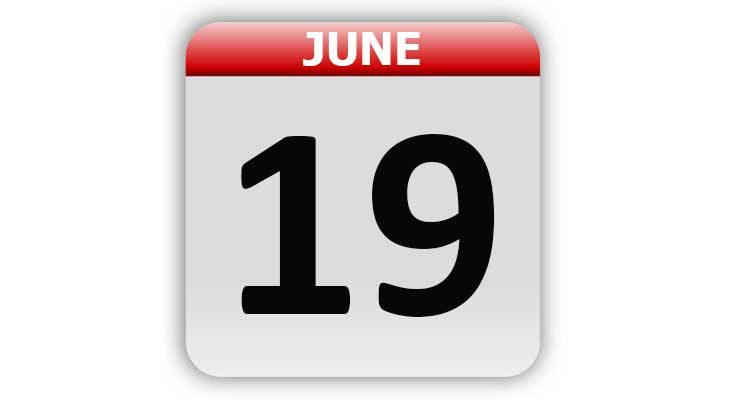 1865 – Over two years after the Emancipation Proclamation, slaves in Galveston, TX, were finally informed of their freedom. The anniversary is still officially celebrated in Texas and 41 other contiguous states as Juneteenth.

1875 – A fire broke out in a blacksmith shop at Bridge Street and Mt. Vernon Avenue in Grand Rapids, MI. The blaze burned most of the west side and burned out of control for hours. Property damage was estimated at a $250,000.

1910 – The first Father’s Day was celebrated in Spokane, WA.

1911 – In Pennsylvania, the first motion-picture censorship board was established.

1934 – The U.S. National Archives and Records Administration was established.

1939 – In Atlanta, GA, legislation was enacted that prohibit pinball machines in the city.

1943 – The National Football League approved the merger of the Philadelphia Eagles and the Pittsburgh Steelers for one season due to a shortage of players due to World War II.

1949 – The first ever NASCAR race was held at Charlotte Motor Speedway.

1964 – The Civil Rights Act of 1964 was approved after surviving an 83-day filibuster in the Senate.

1973 – Gordie Howe left the NHL to join his sons Mark and Marty in the WHA’s (World Hockey League) Houston Aeros.

1978 – The comic strip “Garfield” appeared in newspapers for the first time. “Garfield” holds the Guinness World Record for the most widely syndicated comic strip.

1981 – The movie “Superman II” set the all-time, one-day record for theater box-office receipts when it took in $5.5 million. Thirty years later, the one-day record, held by a “Harry Potter” sequel, was more than $90 million.

1987 – The U.S. Supreme Court struck down the Louisiana law that required that schools teach creationism.

1988 – Over 3,000 East Germans gather at the Berlin Wall to hear Michael Jackson perform a concert on the other side of the wall.

1998 – The grown-up Rick Schroder, who was a child star on TV’s “Silver Spoons”, joined the cast of “NYPD Blue”, replacing Jimmy Smits.

1998 – A study released said that smoking more than doubled risks of developing dementia and Alzheimer’s.

1998 – “The Simpsons” received a star on the Hollywood Walk of Fame.

1999 – Author Stephen King was seriously injured when he was struck from behind by a mini-van while walking along a road in Maine.

2000 – The Supreme Court ruled that a group prayer led by students at public-school football games violated the 1st Amendment’s principle that called for the separation of church and state.

2005 – At the London premiere of movie “War of the Worlds”, a man pretending to be a reporter squirts water from a fake microphone into Tom Cruise’s face. Cruise challenges the man and calls him a “jerk.”

2009 – The movie, “The Proposal”, starring Sandra Bullock and Ryan Reynolds, premiered in theaters.

2012 – WikiLeaks founder Julian Assange requested asylum in London’s Ecuatorian Embassy for fear of extradition to the U.S. after publication of previously classified documents which included footage of civilian killings by the U.S. Army.

International Day for the Elimination of Sexual Violence in Conflict

Tags: A Look Back, Celebrity Birthdays, Days of the Year, June 19, Today in History