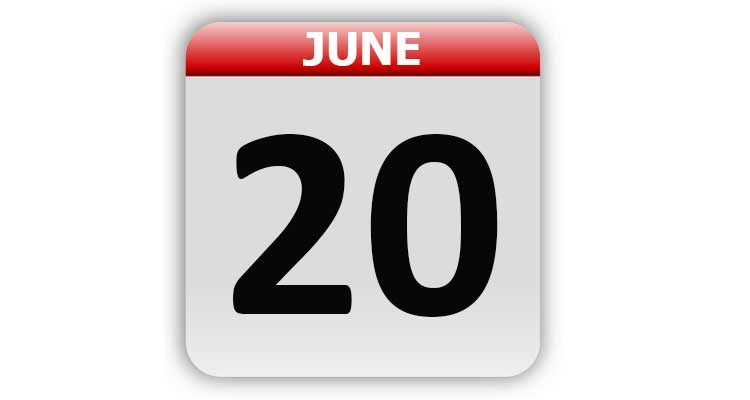 1782 – The U.S. Congress approved the Great Seal of the United States.

1793 – Eli Whitney applied for a cotton gin patent. He received the patent on March 14. The cotton gin initiated the American mass-production concept.

1840 – Samuel Morse received a patent for the telegraph.

1863 – The National Bank of Philadelphia in Philadelphia, PA, became the first bank to receive a charter from Congress.

1893 – Lizzie Borden was acquitted of the murders of her father and stepmother.

1943 – Race-related rioting erupted in Detroit, MI. Federal troops were sent in two days later to end the violence that left more than 30 dead.

1947 – Benjamin “Bugsy” Siegel was shot to death through the window of his girlfriend’s Beverly Hills, CA, home at the order of mob associates angered over the soaring costs of his project, the Flamingo resort in Las Vegas, NV.

1948 – The television show “Toast of the Town” debuted on CBS. The show was hosted by Ed Sullivan. The name of the show was later changed to “The Ed Sullivan Show”.

1955 – The AFL and CIO agreed to combine names and a merge into a single group.

1963 – The United States and Soviet Union signed an agreement to set up a hot line communication link between the two countries.

1966 – The U.S. Open golf tournament was broadcast in color for the first time.

1967 – Muhammad Ali was convicted in Houston, TX of violating Selective Service laws by refusing to be drafted.

1972 – An 18-1/2 minute gap appeared in the tape recording of the conversations between President Richard Nixon and his advisers regarding the recent arrests of his operatives while breaking into the Watergate complex.

1975 – The movie “Jaws” premiered in theaters. It became the highest-grossing film of that time and started the trend of films known as “summer blockbusters”.

1983 – The U.S. Supreme Court ruled that employers must treat male and female workers equally in providing health benefits for their spouses.

1994 – O.J. Simpson pleaded not guilty to the killings of Nicole Brown Simpson and Ronald Goldman.

1997 – The tobacco industry agreed to a massive settlement in exchange for major relief from mounting lawsuits and legal bills.

2001 – Barry Bonds, of the San Francisco Giants, hit his 38th home run of the season. The home run broke the major league baseball record for homers before the midseason All-Star break.

2001 – A Houston, TX woman, Andrea Yates, was arrested for drowning her five children in a bathtub. She claimed she was saving her children from Satan.

2002 – The U.S. Supreme Court ruled that the execution of mentally retarded murderers was unconstitutionally cruel. The vote was 6 in favor and 3 against.

2003 – The movie, “From Justin to Kelly”, starring American Idol first season winner Kelly Clarkson and runner-up Justin Guarini, debuted in theaters. This film is often regarded as one of the worst movies ever made.

National Hike with a Geek Day

Tags: A Look Back, Celebrity Birthdays, Days of the Year, June 20, Today in History