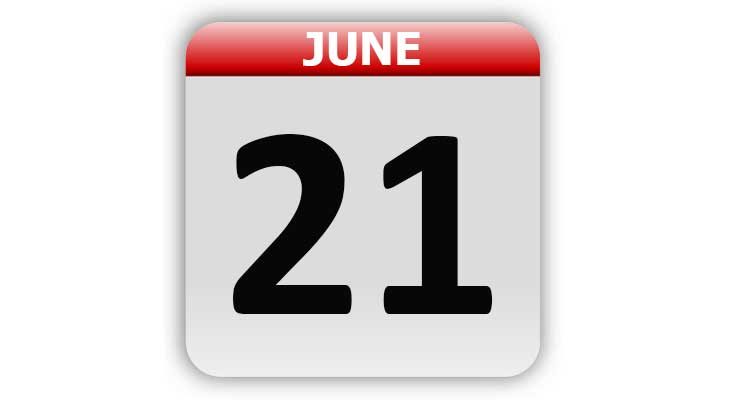 1788 – The U.S. Constitution went into effect when New Hampshire became the ninth state to ratify it.

1893 – The Ferris Wheel was introduced at the World’s Columbian Exposition in Chicago, IL.

1913 – Georgia Broadwick became the first woman to jump from an airplane.

1946 – Bill Veeck Jr., whose father once owned the Chicago Cubs, purchased the Cleveland Indians for $2.2 million.

1972 – Pinball machines were legalized in liquor establishments in Michigan.

1973 – The U.S. Supreme Court ruled that states may ban materials found to be obscene according to local standards.

1974 – The U.S. Supreme Court decided that pregnant teachers could no longer be forced to take long leaves of absence.

1982 – John Hinckley Jr. was found not guilty by reason of insanity for the attempted assassination of President Ronald Reagan.

1989 – The U.S. Supreme Court ruled that burning the American flag as a form of political protest was protected by the First Amendment.

1990 – Little Richard received a star on the Hollywood Walk Of Fame.

1996 – The Disney animated film “The Hunchback of Notre Dame” debuted in theaters.

2003 – The fifth Harry Potter book, “Harry Potter and the Order of the Phoenix,” was published by J.K. Rowling. Amazon.com shipped out more than one million copies making the day the largest distribution day of a single item in e-commerce history. The book set sales records around the world with an estimated 5 million copies sold on the first day.

2004 – Ben Affleck became the California State Poker champion, winning $356,000 by beating a pro named Stan Goldstein in a round of no-limit hold ’em.

2004 – SpaceShipOne, designed by Burt Rutan and piloted by Mike Melvill, reached 328,491 feet above Earth in a 90 minute flight. The height is about 400 feet above the distance scientists consider to be the boundary of space. Michael Melvil became the first person to do so in a privately developed aircraft.

2018 – In Grand Rapids, MI, the yearly ArtPrize competition announced that after their 10 year anniversary, the yearly event would become an every other year event. On the “off” years, they will hold public art projects that will take place from September through October at different places around the city, and include education and cultural programming that is free and open to the public.

National Day of the Gong

Tags: A Look Back, Celebrity Birthdays, Days of the Year, June 21, Today in History