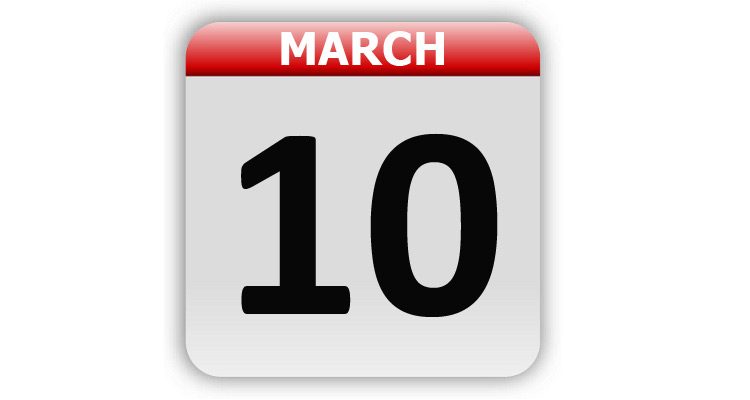 1876 – Alexander Graham Bell made the first successful call with the telephone. He spoke the words “Mr. Watson, come here, I want to see you.”

1893 – New Mexico State University canceled its first graduation ceremony because the only graduate was robbed and killed the night before.

1941 – The Brooklyn Dodgers announced that their players would begin wearing batting helmets during the 1941 season.

1969 – James Earl Ray pleaded guilty in Memphis, TN, to the assassination of Martin Luther King Jr. He was sentenced to 99 years in prison. Ray later repudiated the guilty plea and maintained his innocence until his death in April of 1998.

1971 – The Senate approved a constitutional amendment to lower the voting age to 18.

1977 – Astronomers discovered the rings of Uranus.

1986 – The Wrigley Company, of Chicago, IL, raised the price of its seven-stick pack of Wrigley’s chewing gum from 25 cents to 30 cents.

1987 – The Vatican condemned surrogate parenting as well as test-tube and artificial insemination.

1993 – Jimmy Jam and Terry Lewis receive a star on the Hollywood Walk of Fame.

1998 – U.S. troops in the Persian Gulf began receiving the first vaccinations against anthrax.

2000 – The movie “Mission to Mars” premiered in theaters.

2000 – 55 Oscar statuettes en route to winners at the Academy Awards were stolen from a Roadway Express loading dock.

2004 – Lee Malvo was sentenced to life without parole for his role in the 2002 Washington, D.C. sniper case.

2019 – Ethiopian Airlines Flight 302 crashed. That lead to all 737 MAX aircraft being grounded worldwide

2020 – The World Health Organization officially announced the COVID-19 outbreak as a pandemic.

Tags: A Look Back, Celebrity Birthdays, Days of the Year, March 10, Today in History