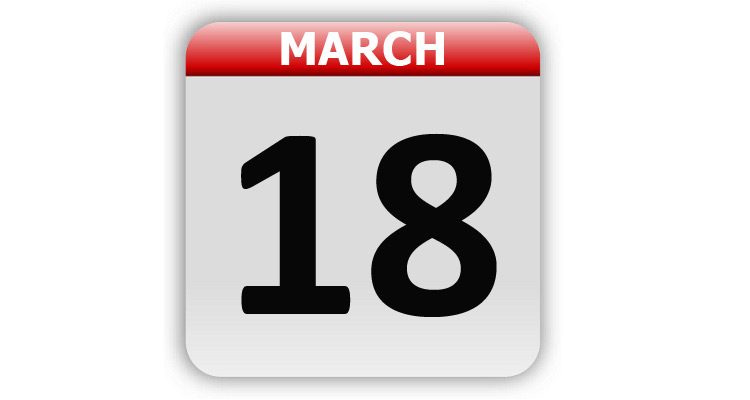 1813 – David Melville received a patent for the gas streetlight.

1834 – The first railroad tunnel in the U.S. was completed in Pennsylvania.

1837 – The University of Michigan prepared to move to Ann Arbor from Detroit.

1911 – Theodore Roosevelt opened the Roosevelt Dam in Arizona. It was the largest dam in the U.S. at the time.

1933 – The Studebaker car company ran out of money and entered receivership.

1942 – The third military draft began in the U.S. because of World War II.

1952 – In Philadelphia, PA, the first plastic lenses were fitted for a cataract patient.

1963 – The Supreme Court handed down the Miranda decision concerning legal council for defendants.

1968 – Congress repealed the requirement for a gold reserve to back U.S. currency.

1970 – Wilson was selected to be the official football and official time scoreboard of the NFL.

1982 – Channel 17 in Grand Rapids came on the air as WWMA. About a year later the call letters were changed to WXMI.

1986 – The Treasury Department announced that a clear, polyester thread was to be woven into bills in an effort to thwart counterfeiters.

1990 – Thirteen paintings, collectively worth around $300 million, were stolen from the Isabella Stewart Gardner Museum in Boston, MA. It was the largest art robbery in history.

1992 – Leona Hemsly was sentenced to 4 years in prison for tax evasion.

1992 – Donna Summer received a star on the Hollywood Walk of Fame.

2000 – The U.S. Postal Service issued a 20-cent stamped postcard that featured the historic Ryman Auditorium, the home of the Grand Ole Opry for more than 30 years.

2010 – Dennis Hopper received a star on the Hollywood Walk of Fame. He died two months later from prostate cancer.

2020 – A man in his 50s died at Beaumont Hospital in Wayne County, becoming Michigan’s first death tied to the coronavirus. On the same day, the U.S.-Canadian border closed for non-essential travel and automakers shut down all North American plants as a precaution.

Tags: A Look Back, Celebrity Birthdays, Days of the Year, March 18, Today in History