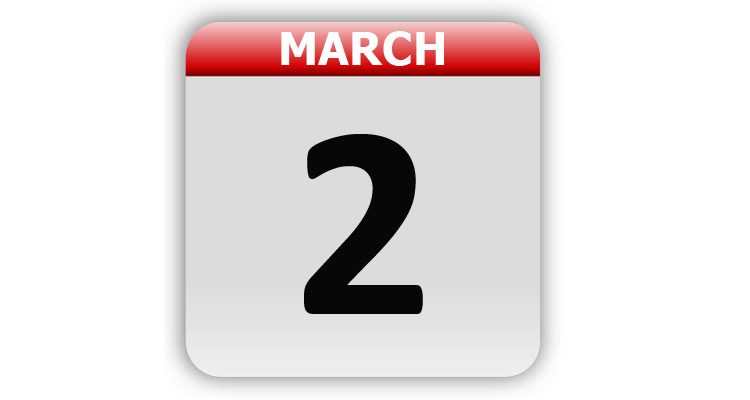 1807 – Congress passed an act to “prohibit the importation of slaves into any port or place within the jurisdiction of the United States… from any foreign kingdom, place, or country.”

1877 – Just two days before the inauguration, Rutherford B. Hayes was declared the winner of the 1876 Presidential election by the U.S. Congress. Samuel J. Tilden, however, had won the popular vote on November 7, 1876.

1897 – President Grover Cleveland vetoed legislation that would have required a literacy test for immigrants entering the country.

1899 – Mount Rainier National Park, in Washington, was established by Congress.

1899 – President William McKinley signed a measure that created the rank of Admiral for the U.S. Navy. The first admiral was George Dewey.

1908 – In Paris, Gabriel Lippmann introduced three-dimensional color photography at the Academy of Sciences.

1917 – Citizens of Puerto Rico were granted U.S. citizenship with the enactment of the Jones Act.

1929 – The U.S. Court of Customs & Patent Appeals was created by Congress.

1939 – The Massachusetts legislature voted to ratify the Bill of Rights to the U.S. Constitution. These first ten amendments had gone into effect 147 years before.

1965 – The movie “The Sound of Music”, starring Julie Andrews and Christopher Plummer, premiered in theaters.

1969 – In Toulouse, France, the supersonic transport Concorde made its first test flight.

1972 – Pioneer 10 was launched from Cape Canaveral, FL, on a mission to explore Jupiter and the outer planets.

1984 – The first McDonald’s franchise was closed. A new location was opened across the street from the old location in Des Plaines, IL.

1985 – The U.S. government approved a screening test for AIDS that detected antibodies to the virus that allowed possibly contaminated blood to be kept out of the blood supply.

1998 – Images from the American spacecraft Galileo indicated that the Jupiter moon Europa has a liquid ocean under a thick crust of ice and a source of interior heat.

2002 – A strong low pressure center moved across the Ohio Valley. It brought a lot of snow to lower Michigan. Grand Rapids had 13.9″ of snow and Muskegon had 10.5″. Both of those totals set records for the snowiest March day on record.

2004 – NASA announced that the Mars rover Opportunity had discovered evidence that water had existed on Mars in the past.

2005 – Kobe Bryant settled a civil suit filed by the woman who accused him of raping her in 2003.

2012 – A tornado outbreak occurred over a large section of the Southern United States and into the Ohio Valley region, resulting in 40 tornado-related fatalities

2017 – The elements Moscovium, Tennessine, and Oganesson were officially added to the periodic table.

Reggie Bush – 37 years old (1985) – Football player (Detroit Lions 2013-2014, was the 2005 Heisman Trophy winner at USC, but forfeited it in 2010 following allegations that he’d received improper benefits during his college career)

Tags: A Look Back, Celebrity Birthdays, Days of the Year, March 2, Today in History