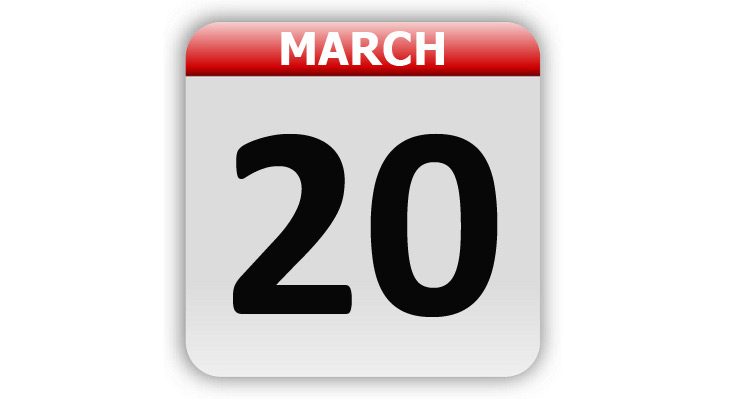 1854 – The Republican Party was organized in Ripon, WI. About 50 slavery opponents began the political group.

1865 – A plan by John Wilkes Booth to abduct President Abraham Lincoln was ruined when Lincoln changed his plans and did not appear at the Soldier’s Home near Washington, DC.

1891 – The first computing scale company was incorporated in Dayton, OH.

1897 – Sebastian Spering Kresge and associates opened the first Kresge dime store in Detroit. The company grew and later became known as Kmart. The company evolved into Sears Holdings Corporation, who own Kmart and Sears.

1897 – The first intercollegiate basketball game that used five players on each team was held. The game was between Yale and Pennsylvania. Yale won by a score of 32-10.

1922 – The USS Langley (CV-1) was commissioned. It was the first aircraft carrier for the U.S. Navy.

1972 – 19 mountain climbers were killed on Japan’s Mount Fuji during an avalanche.

1976 – Patricia Hearst was convicted of armed robbery for her role in the hold up of a bank in San Francisco, CA.

1980 – The U.S. made an appeal to the International Court concerning the American Hostages in Iran.

1984 – The Senate rejected an amendment to permit spoken prayer in public schools.

1985 – For the first time in its 99-year history, Avon representatives received a salary. Previously, they had been paid only commissions.

1986 – Fallon Carrington and Jeff Colby were wed on the TV drama “The Colby’s”. “The Colby’s” was an spin-off of the television show “Dynasty”.

1987 – The Food and Drug Administration approved AZT. The drug was proven to slow the progress of AIDS (Acquired Immune Deficiency Syndrome).

1989 – It was announced that Cincinnati Reds manager Pete Rose was under investigation.

1990 – Gloria Estefan and her band were injured in a bus accident near Scranton, PA.

1991 – The Supreme Court ruled unanimously that employers could not exclude women from jobs where exposure to toxic chemicals could potentially damage a fetus.

1992 – Model Janice Pennington was awarded $1.3 million for an accident on the set of the television game show “The Price is Right”.

1996 – In Los Angeles, brothers Erik and Lyle Menendez were found guilty of first-degree murder for killing their parents.

1996 – The U.K. announced that humans could catch CJD (Mad Cow Disease) after the disease killed 10 people.

1997 – Brian Grazer received a star on the Hollywood Walk of Fame.

1997 – Liggett Group, the maker of Chesterfield cigarettes, settled 22 state lawsuits by admitting the industry marketed cigarettes to teenagers and agreed to place a warning on every pack that smoking is addictive.

1999 – Bertrand Piccard and Brian Jones became the first men to circumnavigate the Earth in a hot air balloon. The non-stop trip began on March 3 and covered 26,500 miles.

2002 – Actress Pamela Anderson disclosed that she had hepatitis C.

2002 – Arthur Andersen pleaded innocent to charges that it had shredded documents and deleted computer files related to the energy company Enron.

2003 – Cisco Systems Inc. announced it was buying The Linksys Group Inc. for $500 million in stock.

2003 – The war in Iraq began as the United States (along with the UK, Australia and Poland) launched operation “Iraqi Freedom”. The predawn air strike targeted Saddam Hussein and other Iraqi leaders in Baghdad.

2005 – After sexually explicit audio recordings of Pat O’Brien appeared on the Internet, the host of the television show “The Insider” announced he was checking himself into an alcohol rehab facility.

2015 – A solar eclipse, vernal equinox, and a supermoon all occurred on the same day.

Won’t You Be My Neighbor Day

Tags: A Look Back, Celebrity Birthdays, Days of the Year, March 20, Today in History