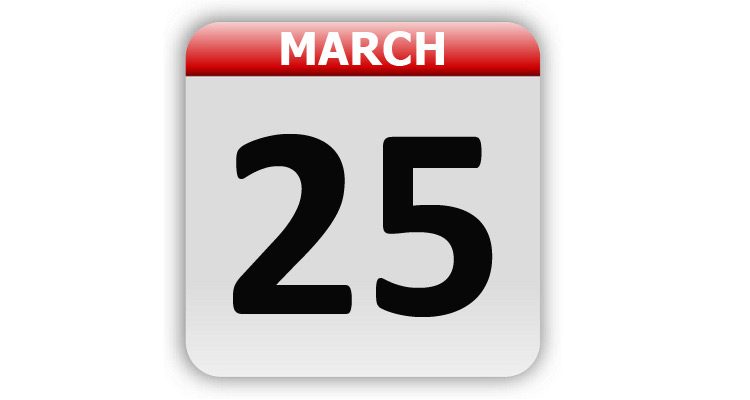 1776 – The Continental Congress authorized a medal for General George Washington.

1813 – The frigate USS Essex flew the first U.S. flag in battle in the Pacific.

1857 – Frederick Laggenheim took the first photo of a solar eclipse.

1898 – The Intercollegiate Trapshooting Association was formed in New York, NY.

1911 – In New York, NY, 146 garment workers (123 women and 23 men) were killed in a fire at the Triangle Shirtwaist Company. The owners of the company were indicted on manslaughter charges because some of the employees had been behind locked doors in the factory. They were later acquitted. In 1914 they were ordered to pay damages to each of the 23 families that had sued.

1936 – The Detroit Red Wings defeated the Montreal Maroons in the longest hockey game to date. Overtime play lasted for 116 minutes, 30 seconds. The Red Wings won 1-0 in the sixth overtime.

1940 – The U.S. agreed to give Britain and France access to all American warplanes.

1947 – John D. Rockefeller III presented a check for $8.5 million to the United Nations for the purchase of land for the site of the U.N. center.

1954 – RCA manufactured its first color television sets and began mass production. It sold for $1,000, which is equivalent to about $8,000 today.

1960 – A guided missile was launched from a nuclear powered submarine for the first time.

1966 – The Supreme Court ruled that the “poll tax” was unconstitutional.

1968 – The 58th and final episode of “The Monkees” television show was aired.

1970 – The Concorde made its first supersonic flight.

1971 – The Boston Patriots, soon to move into a stadium in suburban Foxboro, MA, became the New England Patriots.

1979 – The first fully functional Space Shuttle orbiter, Columbia, was delivered to the John F. Kennedy Space Center to be prepared for its first launch.

1982 – Wayne Gretzky became the first player in the NHL to score 200 points in a season.

1995 – Boxer Mike Tyson was released from jail after serving 3 years for rape.

1996 – The European Union’s Veterinarian Committee baned the export of British beef and its by-products as a result of mad cow disease.

1996 – An 81-day standoff by the anti-government Freemen began at a ranch near Jordan, MT.

1996 – The movie “Twister” became the first feature film to be released on DVD.

1997 – Former President George Bush parachuted from a plane over the Arizona desert.

1998 – A cancer patient was the first known to die under Oregon’s doctor-assisted suicide law.

1998 – The FCC netted $578.6 million at auction for licenses for new wireless technology.

1998 – Quinn Pletcher was found guilty on charges of extortion. He had threatened to kill Bill Gates unless he was paid $5 million.

2020 – It was announced that Prince Charles, Queen Elizabeth II’s son and the heir to the British throne, had tested positive for coronavirus (COVID-19) and was self-isolating in Scotland.

2020 – The Tony Awards and Rock and Roll Hall of Fame inductions were postponed due to COVID-19.

International Day of Solidarity with Detained and Missing Staff Members

Tags: A Look Back, Celebrity Birthdays, Days of the Year, March 25, Today in History