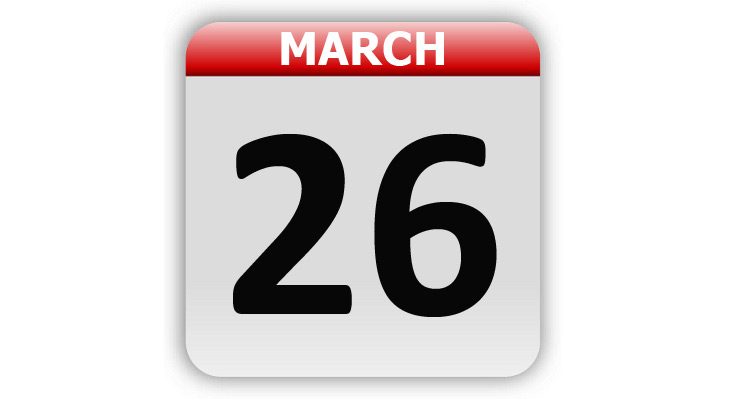 1804 – Congress ordered the removal of Indians east of the Mississippi to Louisiana.

1910 – Congress passed an amendment to the 1907 Immigration Act that barred criminals, paupers, anarchists and carriers of disease from settling in the United States.

1951 – The U.S. Air Force flag was approved. The flag included the coat of arms, 13 white stars and the Air Force seal on a blue background.

1969 – The TV movie “Marcus Welby” was seen on ABC. It was later turned into a weekly television series.

1970 – The film “Woodstock” premiered. It chronicled the festival that happened eight months earlier.

1971 – “Cannon” premiered on CBS as a TV movie. It was turned into a weekly series later in the year.

1972 – The Los Angeles Lakers broke a National Basketball Association (NBA) record by winning 69 of their 82 games.

1973 – The daytime TV soap opera “The Young and the Restless” debuted on CBS.

1982 – Ground was broken for the Vietnam Veterans Memorial in Washington, DC.

1992 – In Indianapolis, IN, heavyweight boxing champion Mike Tyson was found guilty for the rape of Desiree Washington. He was sentenced to six years in prison. He was denied bail and ordered to begin his jail term immediately.

1997 – The 39 bodies of Heaven’s Gate members are found in a mansion in Rancho Santa Fe, CA. The group had committed suicide thinking that they would be picked up by a spaceship following behind the Hale-Bopp comet.

1999 – The “Melissa worm” infected Microsoft word processing and e-mail systems around the world.

1999 – In Michigan, Dr. Jack Kevorkian was convicted of second-degree murder for giving a terminally ill man a lethal injection and putting it all on videotape on September 17, 1998 for the television news magazine “60 Minutes”.

2000 – The Seattle Kingdome was imploded to make room for a new football arena.

2007 – A design for the “Forever Stamp” was unveiled by the U.S. Postal Service.

Keira Knightley – 37 years old (1985) – Actress (“Bend It Like Beckham”, “Pride and Prejudice”, “The Imitation Game”, “Jack Ryan: Shadow Recruit”, “Anna Karenina”, “Atonement”, the “Pirates of the Caribbean” series, “Love Actually”, “A Dangerous Method”, “Seeking a Friend for the End of the World”)

Make Up Your Own Holiday Day

Tags: A Look Back, Celebrity Birthdays, Days of the Year, March 26, Today in History