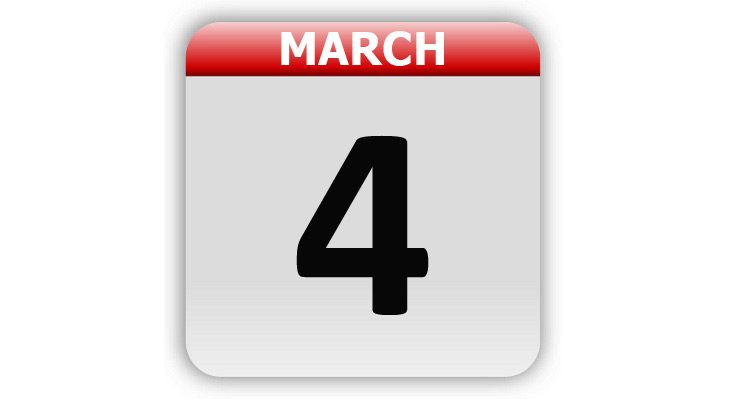 1681 – England’s King Charles II granted a charter to William Penn for an area that would become the state of Pennsylvania.

1789 – The first Congress of the United States met in New York and declared that the U.S. Constitution was in effect.

1791 – Vermont was admitted as the 14th U.S. state. It was the first addition to the original 13 American colonies.

1794 – The 11th Amendment to the U.S. Constitution was passed by Congress. The Amendment limits the jurisdiction of the federal courts to automatically hear cases brought against a state by the citizens of another state. It was later expanded to also include citizens of the state being sued.

1826 – The first railroad in the U.S. was chartered. It was the Granite Railway in Quincy, MA.

1837 – The state of Illinois granted a city charter to Chicago.

1861 – The Confederate States of America adopted the “Stars and Bars” flag.

1877 – Grand Haven, MI’s U.S. Senator Thomas White Ferry (who was acting Vice President) after the V.P.’s death believed he was acting President of the United States for this one day. All set off by the very controversial election of 1876 which was finally decided after 4 months of dispute. Rutherford B. Hayes was actually sworn in on March 3rd, but Ferry didn’t know that at the time.

1880 – The process of halftone engraving was used for the first time when the “Daily Graphic” was published in New York, NY.

1861 – Abraham Lincoln was inaugurated as President.

1881 – Eliza Ballou Garfield became the first mother of a President to live in the executive mansion.

1902 – The American Automobile Association was founded in Chicago, IL.

1908 – The New York Board of Education banned the act of whipping students in school.

1912 – A very cold stretch of weather settled into lower Michigan. Muskegon set a record with a low of -2 degrees. There were five straight days of below zero temperatures.

1917 – Jeanette Rankin of Montana took her seat as the first woman elected to the House of Representatives.

1918 – The USS Cyclops departed from Barbados and is never seen again, presumably lost with its crew in the Bermuda Triangle.

1925 – Calvin Coolidge took the oath of office in Washington, DC. It was the first Presidential inauguration to be broadcast on the radio.

1933 – In his inauguration speech, President Franklin D. Roosevelt said, “We have nothing to fear but fear itself.”

1966 – The Beatles stirred up a worldwide controversy after John Lennon told Maureen Cleave of the “London Evening Standard” that, “The Beatles are more popular than Jesus now.” The remark spurred a huge backlash against the group as many took the comment to be blasphemous,

1974 – “People” magazine was published for the first time as “People Weekly”.

1982 – The TV show “Police Squad!” premiered on ABC. The police show parody was created by David Zucker, Jim Abrahams, and Jerry Zucker. It starred Leslie Nielsen as Frank Drebin. The show was cancelled after six episodes, but it successfully spawned “The Naked Gun” film series from 1988 to 1994. In 2013, TV Guide ranked “Police Squad!” #7 on its list of 60 shows that were “Cancelled Too Soon”.

1985 – The Food and Drug Administration approved a blood test for the AIDS infection, used since then for screening all blood donations in the U.S.

1993 – Patti LaBelle received a star on the Hollywood Walk of Fame.

1998 – The Supreme Court said that federal law banned on-the-job sexual harassment even when both parties are the same sex.

2005 – Martha Stewart was released from federal prison in West Virginia.

Tags: A Look Back, Celebrity Birthdays, Days of the Year, March 4, Today in History