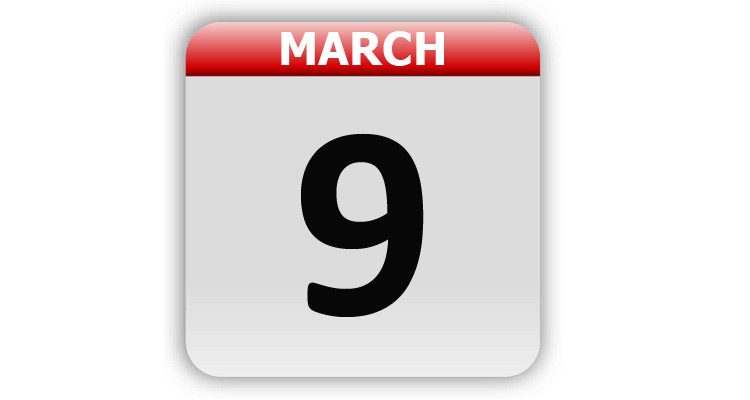 1793 – Jean Pierre Blanchard made the first balloon flight in North America. The event was witnessed by President George Washington.

1820 – Congress passed the Land Act that paved the way for westward expansion of North America.

1832 – Abraham Lincoln announced that he would run for a political office for the first time. He was unsuccessful in his run for a seat in the Illinois state legislature.

1859 – The National Association of Baseball Players adopted the rule that limited the size of bats to no more than 2-1/2 inches in diameter.

1897 – A patent was issued to William Spinks and William Hoskins for cue chalk.

1949 – The first all-electric dining car was placed in service on the Illinois Central Railroad.

1959 – Mattel introduced the Barbie doll at the annual American International Toy Fair in New York, NY. She originally was available with blonde or brunette hair. She was created by Ruth Handler, the co-founder of Mattel. The doll was named after her own daughter Barbara.

1964 – The first Mustang rolled off the Ford assembly line.

1976 – Hot air balloon flights over Michigan become legal. It had been against the law to sell and use hot air balloons in Michigan since 1931.

1984 – The film “Children of the Corn”, based upon Stephen King’s 1977 short story of the same name, premiered in theaters.

1986 – U.S. Navy divers found the Space Shuttle Challenger crew compartment along with the remains of the astronauts.

1990 – Dr. Antonia Novello was sworn in as the first female and Hispanic surgeon general.

2004 – John Muhammad was sentenced to death for his role in the 2002 sniper shootings in the Washington, DC area.

2005 – Dave Matthews Band tour bus driver Stefan Wohl pleaded guilty to charges of reckless conduct and discharging contaminates to cause water pollution. The previous August he had emptied his vehicle’s septic tank while driving across the open grating deck of the Kinzie Street bridge onto a boat on the Chicago River. He was sentenced to 18 months probation and 150 hours of community service.

2011 – After a total of 39 flights, the Space Shuttle Discovery made its final landing.

National Get Over It Day

Tags: A Look Back, Celebrity Birthdays, Days of the Year, March 9, Today in History