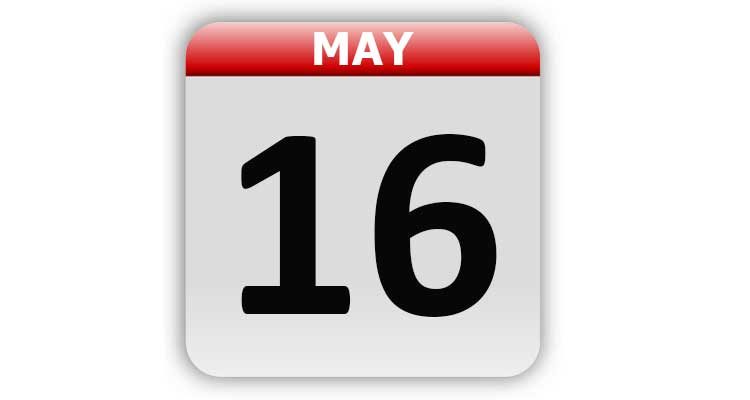 1866 – The U.S. Congress eliminated the half dime coin and replaced it with the 5-cent piece, or nickel.

1868 – President Andrew Johnson was acquitted during the Senate impeachment, by one vote.

1888 – The first demonstration of recording on a flat disc was demonstrated by Emile Berliner.

1929 – The first Academy Awards ceremony was held in Hollywood, CA.

1939 – The Philadelphia Athletics and the Cleveland Indians met at Shibe Park in Philadelphia, PA, for the first baseball game to be played under the lights in the American League.

1972 – By a 2-to-1 margin, Michigan voters approved a constitutional amendment allowing for a state lottery.

1975 – Muhammad Ali TKO’s Ron Lyle in the 11th round of a bout in Las Vegas, NV, to retain the heavyweight boxing title.

1977 – Muhammad Ali wins a unanimous 15 round decision over Alfredo Evangelista to retain the heavyweight boxing title.

1980 – Dr. George C. Nichopoulos was indicted in Memphis on 14 counts of overprescribing drugs to Elvis Presley, Jerry Lee Lewis and nine other patients.

1983 – The television special “Motown 25: Yesterday, Today and Forever” aired. It was a recording of the first time that Michael Jackson performed the moonwalk for a live audience.

1985 – Michael Jordan was named Rookie of the Year in the NBA.

1986 – The movie “Top Gun”, starring Tom Cruise, Kelly McGillis, Val Kilmer, Anthony Edwards, and Tom Skerritt, premiered in theaters. The film had made approximately $171.1 million by the end of the year.

1988 – A report released by Surgeon General C. Everett Koop declared that the addictive properties of nicotine were similar to those of heroin and cocaine.

1988 – The U.S. Supreme Court ruled that police do not have to have a search warrant to search discarded garbage.

1992 – The Endeavour Space Shuttle landed safely after its maiden voyage.

2000 – Hillary Rodham Clinton was nominated to run for U.S. Senator in New York. She was the first former First Lady to run for public office.

2001 – The first MacBook laptop was released.

2002 – Rachel Green (Jennifer Aniston) had a daughter with Ross Geller (David Schwimmer) on the eighth season finale of TV’s “Friends”.

2011 – STS-134 launched from Kennedy Space Center on the 25th and final flight for Space Shuttle Endeavour.

International Day of Living Together in Peace

National Do Something Good for Your Neighbor Day

Tags: A Look Back, Celebrity Birthdays, Days of the Year, May 16, Today in History