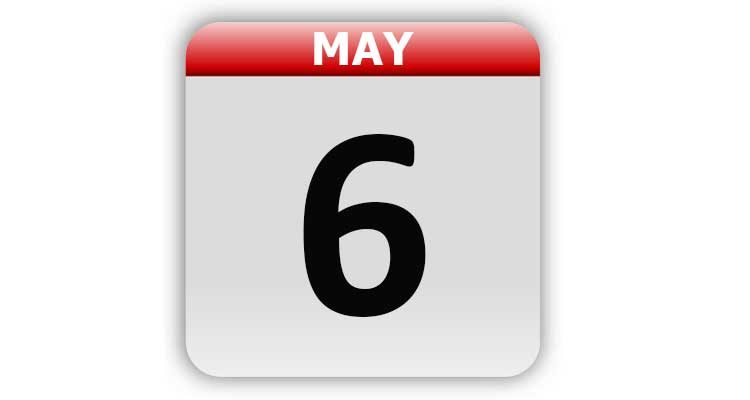 1851 – The mechanical refrigerator was patented by Dr. John Gorrie.

1861 – Arkansas became the ninth state to secede from the Union.

1889 – The Universal Exposition opened in Paris, France, marking the dedication of the Eiffel Tower. Also at the exposition was the first automobile in Paris, the Mercedes-Benz.

1937 – The German airship Hindenburg crashed and burned while attempting to dock in Lakehurst, NJ. Thirty-six people (of the 97 on board) were killed.

1957 – Senator John Fitzgerald Kennedy was awarded the Pulitzer Prize for his book “Profiles in Courage”.

1959 – The Pablo Picasso painting of a Dutch girl was sold for $154,000 in London. It was the highest price paid (at the time) for a painting by a living artist.

1962 – The first nuclear warhead was fired from the Polaris submarine.

1982 – Diana Ross received a star on the Hollywood Walk of Fame. The Supremes were not honored until 1994.

1994 – The Pearl Jam vs. Ticketmaster fight began when the band canceled their summer tour and filed a complaint with the Justice Department, charging that the company had a monopoly on the concert ticket business.

1994 – The Channel Tunnel officially opened. The tunnel under the English Channel links England and France.

1994 – Former Arkansas state worker Paula Jones filed suit against President Bill Clinton. The case alleged that he had sexually harassed her in 1991.

1997 – Four health-care companies agreed to a settlement of $600 million to hemophiliacs who had contracted AIDS from tainted blood between 1978-1985.

1999 – A parole board in New York voted to release Amy Fisher. She had been in jail for 7 years for shooting (but not killing) her lover’s wife, Mary Jo Buttafuoco, in the face.

2001 – Chandra Levy’s parents reported her missing to police in Washington, DC. Levy’s body was found on May 22, 2002 in Rock Creek Park.

2004 – NBC aired the final episode of “Friends”. 52.46 million viewers turned in to make it the 4th most watched TV series finale in U.S. history.

2005 – In Augusta, GA, a statue of James Brown was unveiled. The bronze life size statue was to commemorate Brown’s musical accomplishments.

2013 – Three women missing for more than a decade were found alive in Cleveland, OH. Ariel Castro was taken into custody.

Tags: A Look Back, Celebrity Birthdays, Days of the Year, May 6, Today in History