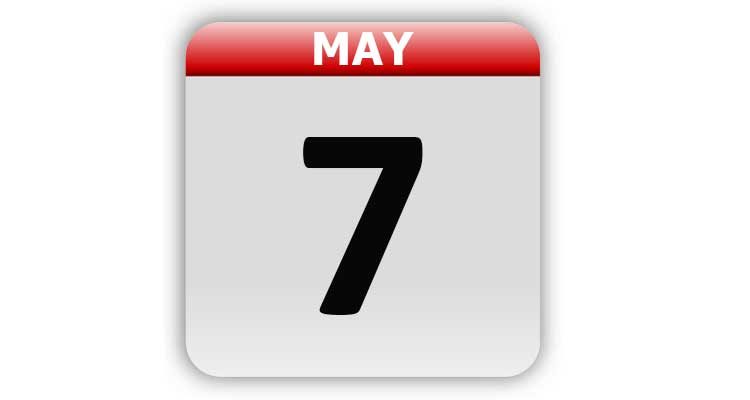 1718 – The city of New Orleans was founed by Jean-Baptiste Le Moyne de Bienville.

1763 – Indian chief Pontiac began all out war on the British in New York.

1847 – The AMA (American Medical Association) was organized in Philadelphia, PA.

1912 – The first airplane equipped with a machine gun flew over College Park, MD.

1914 – President Woodrow Wilson issues a proclamation making Mother’s Day a national holiday on the second Sunday of May.

1926 – A U.S. report showed that one-third of the nation’s exports were motors.

1951 – Russia was admitted to participate in the 1952 Olympic Games by the International Olympic Committee.

1968 – Reginald Dwight decided to change his name to Elton John.

1975 – President Gerald Ford declared an end to “The Vietnam era.”

1976 – The Honda Accord was officially launched.

1977 – Rookie Janet Guthrie set the fastest time on opening day of practice for the Indianapolis 500.

1982 – Diana Ross received a star on the Hollywood Walk of Fame.

1984 – A $180 million out-of-court settlement was announced in the Agent Orange class-action suit brought by Vietnam veterans who claimed they had suffered injury from exposure to the defoliant while serving in the armed forces.

1987 – Shelley Long made her last regular appearance as “Diane Chambers” on TV’s “Cheers”.

1991 – A judge in Macon, GA, dismissed a wrongful death suit against Ozzy Osbourne. A local couple failed to prove their son was inspired to attempt suicide by Ozzy’s music.

1992 – The Space Shuttle Endeavour was launched on its first mission (STS-49).

1992 – Michigan ratified a 203-year-old proposed amendment to the U.S. Constitution making the 27th Amendment law. This amendment bars the U.S. Congress from giving itself a mid-term pay raise

1994 – The Edvard Munch painting “The Scream” was recovered after being stolen 3 months earlier from an Oslo Museum. This version of “The Scream”, one of four different versions, was painted on paper.

1998 – Daimler-Benz bought Chrysler Corp. for close to $40 billion. It was the largest industrial merger on record.

1998 – Leeza Gibbons received a star on the Hollywood Walk of Fame.

1999 – A jury found “The Jenny Jones Show” liable in the shooting death of Scott Amedure by a guest he outed on the show. The jury awarded his estate $25 million.

1999 – Jerry Moss received a star on the Hollywood Walk of Fame.

2003 – In Washington, DC, General Motors Corp. delivered six fuel cell vehicles to Capitol Hill for lawmakers and others to test drive during the next two years.

2004 – The documentary “Super Size Me” was released on this date. We found out what happens when you eat nothing but McDonald’s for a month.

2004 – American businessman Nick Berg was beheaded by Islamic militants. The video of the act was released on the Internet.

Tags: A Look Back, Celebrity Birthdays, Days of the Year, May 7, Today in History