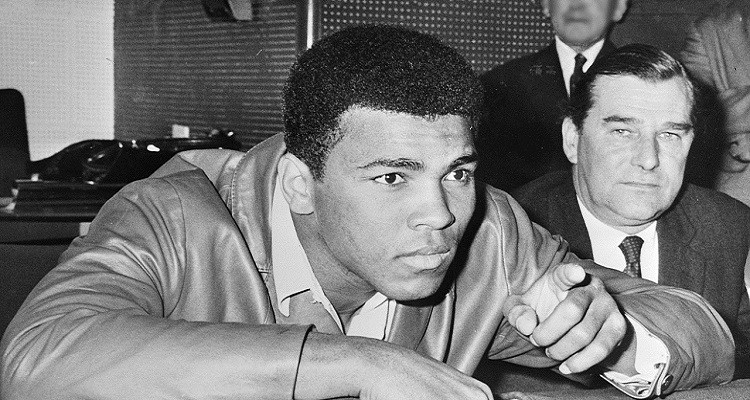 Over the years there have been rumors of Muhammad Ali’s death. They were all false…until now. Ali passed away last Friday at the age of 74.

Some of my earliest memories of boxing go back to my childhood. I remember watching Howard Cosell on a black and white TV in the living room. He was talking about this boxer named “Muhammad Ali”. I always loved how Howard said Muhammad’s name. Howard had a certain accent and way to draw out the name.

Muhammad was an interesting character. Originally named Cassius Clay, he went on to be one of the greatest boxers of all time. He had some controversy along the way, including being found guilty of draft evasion and being stripped of his medals. And who can’t forget the memorial lighting of the Olympic flame at the Summer Olympic games in Atlanta back in 1996. Or his appearance at the London Olympics in 2012

Rex Larsen, who for many years was a photographer for The Grand Rapids Press, recently posted on his Facebook page about his experience photographing Ali: “One of my favorite photo assignments was the week I spent with Muhammed Ali in the foothills of Deer Lake Pennsylvania at his training camp. He was training to regain the heavyweight championship from Larry Holmes. Ali was a friendly and gracious host. We often had breakfast together. In the evening he’d invite me to his room to relax and watch the news on tv. He loved to show off new magic tricks he learned. I was the only photographer at his rustic training camp. The only thing off limits to me was photographing Ali offering afternoon prayers in the small “chapel” he had constructed in the woods. Before I left he gave me a copy of his chef’s new cookbook, Cooking for the Champ. In it he wrote, “Dear Rex, Service to others is the rent I pay for my place on earth.” I enjoyed your visit. Muhammed Ali” He was and still is The Greatest.”

At one point, Muhammad Ali had an estate in Berrien Springs, MI. Chicago Tribune reporter Fred Mitchell spend a day with Ali and wrote about it in his article “My day with Muhammad Ali in Michigan“.

To read more about Muhammad Ali’s death, here is a story from NBC News.