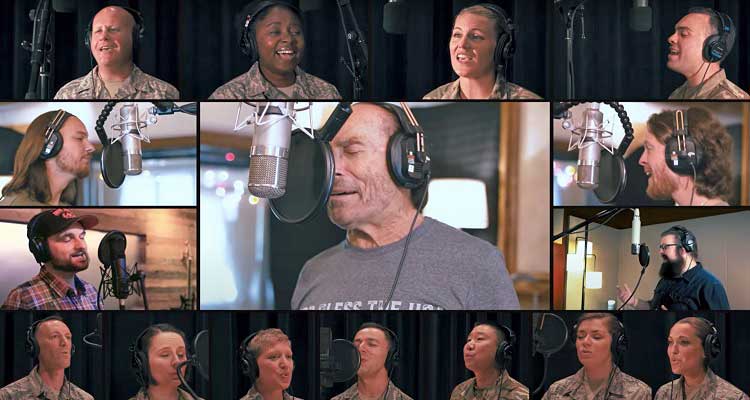 A New Version of “God Bless the U.S.A”

Back in 1984, singer Lee Greenwood released his patriotic signature song “God Bless the U.S.A.”. The song became popular again during the Gulf War in 1991 and after the September 11, 2001, attacks (becoming his highest charting pop hit, reaching number 16 on the Billboard Hot 100).

Greenwood wrote God Bless the U.S.A. in response to his feelings about the shooting down of Korean Air Lines Flight 007. He said that he “wanted to write it my whole life. I’ve always wanted to write a song about America.” Greenwood said the song wrote that it more or less “wrote itself”, and that the lyrics flowed naturally from the music as a reflection of his pride to be American.

Recently Lee joined with The United States Air Force Band, Home Free and The Singing Sergeants to create a new version of the song.

The video was produced remotely with performers recording from locations across the country in cities like Los Angeles, Minneapolis, Nashville, and Washington D.C.

With the release of the new song just a few days ago, Lee commented: “How wonderful to sing with Home Free –- such artistic singers. I’ve never before enjoyed such freedom to be able to sing ‘God Bless the U.S.A.’ — like you’ve never heard it. Thank you as well for the fantastic singers from the United States Air Force. They can really sing! Happy Independence Day, America.”

Give it a listen…

With all the craziness going on in our country, we need a song like this now more than ever.

And that was just my allergies acting up and bothering my eyes. That wasn’t a tear. (OK, yes it was a tear!)