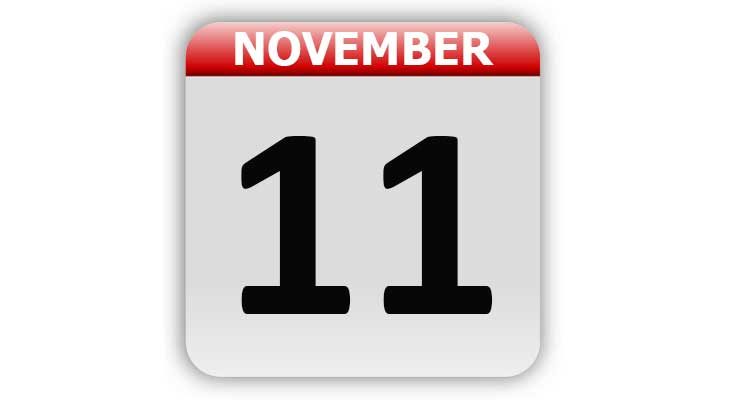 1620 – The Mayflower Compact was signed by the 41 men on the Mayflower when they landed in what is now Provincetown Harbor near Cape Cod, MA. The compact called for “just and equal laws.”

1889 – Washington became the 42nd state of the United States.

1911 – Many cities in the midwestern U.S. broke their record highs and lows on the same day as a strong cold front rolled through.

1918 – World War I came to an end when the Allies and Germany signed an armistice. This day became recognized as Veteran’s Day in the United States.

1921 – The Tomb of the Unknowns was dedicated at Arlington Cemetery in Virginia by President Warren G. Harding.

1928 – Grand Rapids, MI radio stations WOOD and WASH were assigned to the frequency of 1270 KC and told by the FCC that they must share the spot on the dial.

1929 – The Ambassador Bridge, between Detroit, MI and Canada, opened.

1930 – Albert Einstein and Leo Szilard were awarded a patent for the Einstein refrigerator.

1966 – NASA’s Gemini 12 was launched from Cape Kennedy, FL. The craft circles the Earth 59 times before returning.

1978 – The Cars released “My Best Friend’s Girl”. It was the first picture-disc single commercially available.

1981 – In about 6 hours, Stuntman Dan Goodwin scaled the outside of the 100-story John Hancock Center in Chicago, IL.

1981 – The first Trident class submarine, the U.S.S. Ohio, was commissioned at the Electric Boat Division in Groton, CT.

1984 – Gary Coleman, at age 13, underwent his second kidney transplant in Los Angeles, CA. He had his first transplant at age 5.

1988 – Police in Sacramento, CA, found the first of seven bodies buried on the grounds of a boardinghouse. Dorothea Puente was later charged in the deaths of nine people, convicted of three murders and sentenced to life in prison.

1993 – Walt Disney Co. announced plans to build a U.S. history theme park in a Virginia suburb of Washington. The plan was halted later due to local opposition.

1993 – In Washington, DC, a bronze statue was dedicated to honor the more than 11,000 women who had served in the Vietnam War.

1997 – The Eastman Kodak Company announced that they were laying off 10,000 employees.

1998 – Jay Cochrane set a record for the longest blindfolded skywalk. He walked 600 feet on a tightrope between the towers of the Flamingo Hilton in Las Vegas, NV.

1998 – Vincente Fernandez received a star on the Hollywood Walk of Fame.

2014 – A collection of clothing worn by Madonna during her career in music and film helped a celebrity auction raise $3.2 million. A jacket from “Desperately Seeking Susan”, brought in $252,000 — the highest priced piece of clothing.

Tags: A Look Back, Celebrity Birthdays, Days of the Year, November 11, Today in History