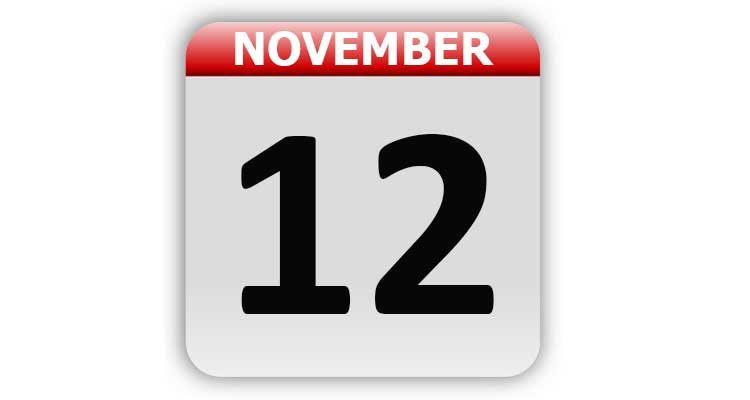 1799 – Andrew Ellicott Douglass witnessed the Leonids meteor shower from a ship off the Florida Keys.

1859 – The first flying trapeze act was performed by Jules Leotard at Cirque Napoleon in Paris, France. He was also the designer of the leotard, a garment that was named after him.

1892 – William “Pudge” Heffelfinger became the first professional football player when he was paid a $500 bonus for helping the Allegheny Athletic Association beat the Pittsburgh Athletic Club.

1909 – The first mile of paved concrete road in Michigan was laid on Woodward Avenue, between 6 and 7 Mile Roads, in Detroit.

1912 – The frozen bodies of Robert Scott and his men were found on the Ross Ice Shelf in Antarctica.

1931 – Maple Leaf Gardens opened in Toronto, Ontario, Canada. It was to be the new home of the NHL’s Toronto Maple Leafs.

1933 – Hugh Gray took the first known photos alleged to be of the Loch Ness Monster.

1933 – In Philadelphia, PA, the first Sunday football game was played.

1936 – In California, the San Francisco-Oakland Bay Bridge opened to traffic.

1946 – The first drive-up bank opened at the Exchange National Bank in Chicago, IL.

1953 – The National Football League policy of blacking out home games was upheld by Judge Allan K. Grim of the U.S. District Court in Philadelphia, PA.

1979 – President Jimmy Carter ordered a halt to all oil imports from Iran in response to 63 Americans being taken hostage at the U.S. embassy in Tehran, Iran.

1980 – The U.S. space probe Voyager I came within 77,000 miles of Saturn while taking the first images of the planet’s rings and transmitting data back to Earth.

1987 – The American Medical Association issued a policy statement that said it was unethical for a doctor to refuse to treat someone solely because that person had AIDS or was HIV-positive.

1990 – The IRS seized all of Willie Nelson’s assets, including a golf course and recording studio, to satisfy a $6.5 million debt.

1995 – The Space Shuttle Atlantis blasted off on a mission to dock with the Russian space station Mir.

1997 – Ramzi Yousef was found guilty of masterminding the 1993 bombing of the World Trade Center.

1998 – Daimler-Benz completed a merger with Chrysler to form Daimler-Chrysler AG.

2001 – American Airlines flight 587, enroute to the Dominican Republic, crashed just minutes after take off from Kennedy Airport in New York, NY, killing all 260 people on board and 5 people on the ground. The Airbus A300 crashed into the Rockaway Beach section of Queens, NY.

2002 – Stan Lee filed a lawsuit against Marvel Entertainment Inc. He claimed the company had cheated him out of millions of dollars in movie profits related to the 2002 movie “Spider-Man.” Lee created Spider-Man, the Incredible Hulk and Daredevil.

2007 – The video game Super Mario Galaxy was released in the United States.

2013 – U.S. Airways and AMR reached an antitrust settlement with the U.S. Department of Justice which would allow a merger of the two companies. It created the world’s largest airline.

2014 – The European Space Agency’s Rosetta spacecraft used its lander Philae to perform the first soft landing on a comet. The comet was 67P/Churyumov-Gerasimenko.

National Pizza with the Works Except Anchovies Day

Tags: A Look Back, Celebrity Birthdays, Days of the Year, November 12, Today in History