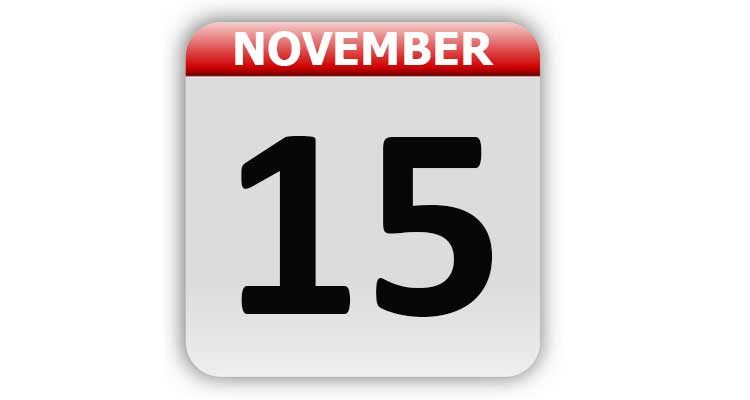 1777 – The Continental Congress approved the Articles of Confederation, the precursor to the U.S. Constitution.

1806 – Explorer Zebulon Pike spotted the mountaintop that became known as Pikes Peak in the Rocky Mountains in Colorado.

1926 – The National Broadcasting Company debuted with a radio network of 24 stations.

1939 – President Franklin Roosevelt laid the cornerstone of the Jefferson Memorial in Washington, DC.

1940 – The first 75,000 men were called to Armed Forces duty under peacetime conscription.

1965 – The Soviet probe, Venera 3, was launched from Baikonur, Kazakhstan. On March 1, 1966, it became the first unmanned spacecraft to reach the surface of another planet when it crashed on Venus.

1969 – In Washington, DC, a quarter of a million protesters staged a peaceful demonstration against the Vietnam War.

1979 – A package from Unabomber, Ted Kaczynski, began smoking in the cargo hold of a flight from Chicago, IL to Washington, DC, forcing the plane to make an emergency landing.

1985 – A research assistant was injured when a package from the Unabomber exploded. The package was addressed to a University of Michigan professor.

1986 – Ivan F. Boesky, reputed to be the highest-paid person on Wall Street, faced penalties of $100 million for insider stock trading. It was the highest penalty ever imposed by the SEC.

1990 – Frank Farian, producer of Milli Vanilli, publicly admitted that Fabrice Morvan and Rob Pilatus never sang a note on the Milli Vanilli album and that they lip-synced when they performed live.

1996 – Michael Jackson married Debbie Rowe (his 2nd wife), who was his plastic surgeon’s nurse, in Sydney, Australia. She was pregnant with his first child. The couple had two children before divorcing.

2002 – Paul “Pee-wee Herman” Reubens ran afoul of the law again when he was arrested and charged with possession of child pornography.

2002 – Joe Biden became the first sitting Vice President to act on an American TV series, playing himself on “Parks and Recreation”.

2005 – Robert Blake was found liable for the wrongful death of his slain wife Bonny Lee Bakley and was ordered to pay $30 million in damages to her family.

2005 – In Amiens, France, Isabelle Dinoire became the first person to undergo a partial face transplant. She had been attacked by a dog earlier in the year.

2006 – The TV game show “Show Me the Money” debuted on ABC. It was hosted by William Shatner. It was cancelled after just five episodes.

2007 – Baseball star Barry Bonds was indicted on perjury and obstruction of justice charges for telling a federal grand jury he did not knowingly use performance-enhancing drugs.

I Love to Write Day

National Clean Out Your Refrigerator Day

Tags: A Look Back, Celebrity Birthdays, Days of the Year, November 15