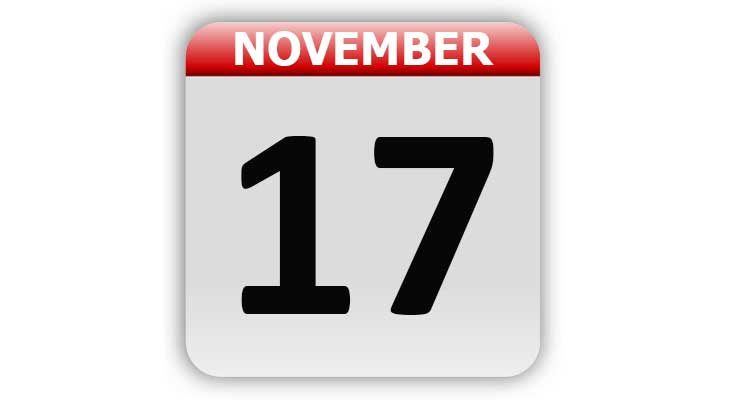 1800 – The U.S. Congress held its first session in Washington, DC, in the partially completed Capitol building.

1820 – Captain Nathaniel Palmer became the first American to see Antarctica. The Palmer Peninsula was later named after him.

1869 – The Suez Canal opened in Egypt, linking the Mediterranean and the Red seas.

1871 – The National Rifle Association was granted a charter by the state of New York.

1904 – The first underwater submarine journey was taken, from Southampton, England, to the Isle of Wight.

1947 – American scientists John Bardeen and Walter Houser Brattain observed the basic principles of the transistor, a key element for the electronics revolution of the 20th century.

1954 – The United States Senate had used the same gavel since 1789. On this date, Vice President Richard Nixon cracked it while using it during a heated debate on nuclear energy,.

1968 – NBC cut away from the final minutes of a New York Jets-Oakland Raiders game to begin a TV special, “Heidi,” on schedule. The Raiders came from behind to beat the Jets 43-32. Football fans flood the network switchboard with complaints, which led to a network sports policy of pushing back the start of prime time programming if need be.

1970 – The Soviet Union landed an unmanned, remote-controlled vehicle on the moon, the Lunokhod 1.

1973 – In Orlando, FL, President Richard Nixon remarked at an Associated Press managing editors meeting “people have got to know whether or not their President is a crook. Well, I’m not a crook”.

1980 – Meteorologist George Lessens made his debut on WZZM TV-13 in Grand Rapids, MI.

1982 – The Empire State Building was added to the National Register of Historical Places.

1989 – The Disney animated movie “The Little Mermaid” premiered in theaters.

1993 – The U.S. House of Representatives passed resolutions to establish the North American Free Trade Agreement after greater authority in trade negotiations were granted to President George Bush in 1991.

1997 – Mario Lemieux was voted into the NHL Hall of Fame.

2003 – Arnold Schwarzenegger was sworn in as Governor of California.

2003 – Britney Spears (at 21 years old) became the youngest singer to get a star on the Hollywood Walk of Fame.

2006 – Michael Richards, who played “Kramer” on Seinfeld, exploded in a burst of racist profanity unleashing a half dozen “N” words after being heckled at an Los Angeles, CA, comedy club.

2010 – Researchers trapped 38 antihydrogen atoms. It was the first time humans had trapped antimatter.

2013 – A late-season tornado outbreak struck the Midwest. Illinois and Indiana were most affected with tornado reports as far north as lower Michigan. Six dozen tornadoes touched down in an 11 hour time period, including seven EF3 and two EF4 tornadoes.

2019 – The first known case of COVID-19 was traced to a 55-year-old man who had visited a market in Wuhan, Hubei Province, China.

Tags: A Look Back, Celebrity Birthdays, Days of the Year, November 17, Today in History