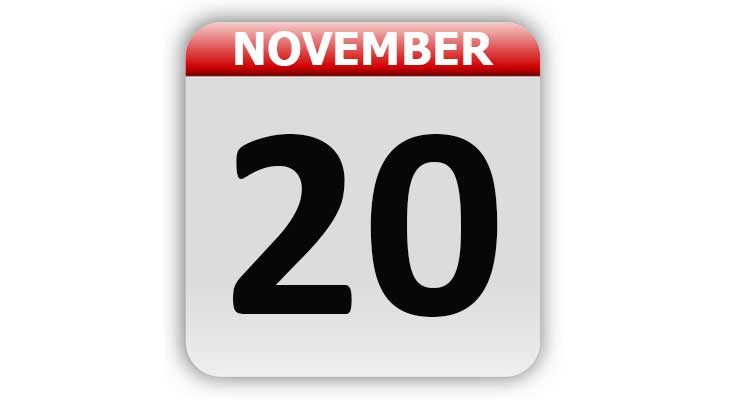 1789 – New Jersey became the first state to ratify the Bill of Rights.

1820 – An 80-ton sperm whale attacked the whaling ship the “Essex” from Nantucket, MA, two-thousand miles from the western coast of South America. Herman Melville’s 1851 novel “Moby Dick” was in part inspired by this story.

1866 – Haven and Hettrich received a patent for the whirligig, also known as the Yo-Yo. The toy actually dates back as far as 440 B.C.

1916 – Harry Houdini appeared in Grand Rapids at the Empress Theater. Several thousand people gathered to watch Houdini break free from a police straight jacket and handcuffs while suspended by his feet from the new Grand Rapids Savings Bank building. The intersection of Monroe and Ionia was backed up for two blocks with people who came to watch.

1953 – Birmingham, MI became the second city in the United States to have direct long distance dialing.

1962 – The Cuban Missile Crisis ended. The Soviet Union removed its missiles and bombers from Cuba and the U.S. ended its blockade of the island.

1962 – Mickey Mantle was named the American League Most Valuable Player for the third time.

1967 – The Census Clock at the Department of Commerce in Washington, DC, went past 200 million.

1969 – The Richard Nixon administration announced a halt to residential use of the pesticide DDT as part of a total phase out of the substance.

1973 – The animated special, “A Charlie Brown Thanksgiving”, aired for the very first time.

1974 – The U.S. Department of Justice filed its final anti-trust suit against AT&T Corporation. This suit later leads to the breakup of AT&T and its Bell System.

1980 – On Jefferson Island, LA, an oil rig in Lake Pigneur pierced the top of the salt dome beneath the island. The freshwater lake completely drained within a few hours. The Delcambre Canal reversed flow and two days later the previous freshwater lake was a 1,300-foot-deep saltwater lake.

1982 – At the age of 7, Drew Barrymore became the youngest host of TV’s “Saturday Night Live”

1983 – An estimated 100 million people watched the controversial ABC-TV movie “The Day After.” The movie depicted the outbreak of nuclear war.

1986 – The one billionth Little Golden Book was printed. The title was “The Poky Little Puppy”.

1998 – The first module of the International Space Station, Zarya, was launched.

1998 – Forty-six states agreed to a $206 billion settlement of health claims against the tobacco industry. The industry also agreed to give up billboard advertising of cigarettes.

2006 – The News Corporation bows to pressure and killed O.J. Simpson’s upcoming book, “If I Did It”, in which he speculates how he would have killed his ex-wife if, of course, he had killed her and a 2-part FOX television special promoting it.

2017 – The Georgia Dome in Atlanta was imploded.

Tags: A Look Back, Celebrity Birthdays, Days of the Year, November 20, Today in History