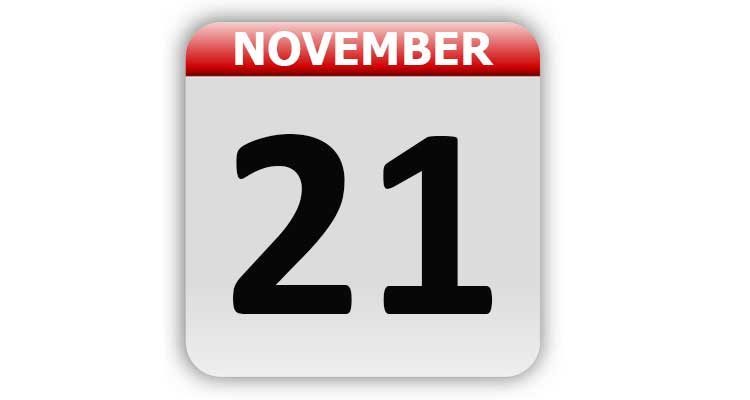 1620 – The Mayflower reached Provincetown, MA. The ship discharged the Pilgrims at Plymouth, MA, on December 26, 1620.

1783 – The first successful flight was made in a hot air balloon. The pilots, Francois Pilatre de Rosier and Francois Laurent, Marquis d’Arlandes, flew for 25 minutes and 5-1/2 miles over Paris.

1847 – There was a tragic fire on the Lake Michigan schooner taking Dutch immigrants to Wisconsin. Two hundred lives were lost in the Phoenix disaster.

1877 – Thomas A. Edison announced the invention of his phonograph, a machine that could record and play sound.

1922 – Rebecca L. Felton, of Georgia, was sworn in as the first woman to serve as a member of the U.S. Senate.

1942 – The Alaska Highway across Canada was formally opened. It was not usable by general vehicles until the following year.

1945 – The United Auto Workers went on strike at 92 General Motors plants in 50 cities to back up worker demands for a 30% raise. Two thousand workers continued their strike for 119 days.

1963 – President John F. Kennedy and his wife, Jacqueline, arrived in San Antonio, TX. They were beginning an ill-fated, two-day tour of Texas that would end in Dallas.

1973 – President Richard M. Nixon’s attorney, J. Fred Buzhardt, announced the presence of an 18-1/2 minute gap in one of the White House tape recordings related to the Watergate case.

1975 – Elton John received a star on Hollywood’s Walk of Fame.

1977 – The final stretch of I-96 was opened to the public. The highway stretches from Muskegon to Detroit, MI for a total of 193 miles.

1980 – An estimated 83 million viewers tuned in to find out “who shot J.R.?” on the CBS prime-time television soap opera “Dallas”. Kristin was the character that fired the gun.

1980 – A deadly fire broke out at the MGM Grand Hotel in Paradise, NV (now Bally’s Las Vegas). Eighty-seven people were killed and more than 650 were injured in the worst disaster in Nevada history.

1986 – National Security Council members Oliver North and his secretary started to shred documents allegedly implicating them in the Iran-Contra affair.

1992 – U.S. Senator Bob Packwood, issued an apology but refused to discuss allegations that he’d made unwelcome sexual advances toward 10 women in past years.

1992 – A major tornado hit the Houston, TX area during the afternoon. Over the next two days, the largest tornado outbreak to ever occur in the U.S. during the month of November spawned over 100 tornadoes.

1993 – The U.S. House of Representatives voted against making the District of Columbia the 51st state.

2001 – Microsoft Corp. proposed giving $1 billion in computers, software, training and cash to more than 12,500 of the poorest schools in the U.S. The offer was intended as part of a deal to settle most of the company’s private antitrust lawsuits.

2003 – In Santa Barbara, CA, Michael Jackson was booked on suspicion of child molestation. He immediately posted the $3 million bail and then flew back to Las Vegas, NV, where he had been filming a video. He was given an arraignment date of January 9, 2004.

2003 – The live action movie of Dr. Seuss’s “The Cat in the Hat”, starring Mike Myers, debuted in theaters.

2003 – Phil Spector was charged with the murder of Lana Clarkson at his home the previous February. Spector pleaded innocent.

Tags: A Look Back, Celebrity Birthdays, Days of the Year, November 21, Today in History