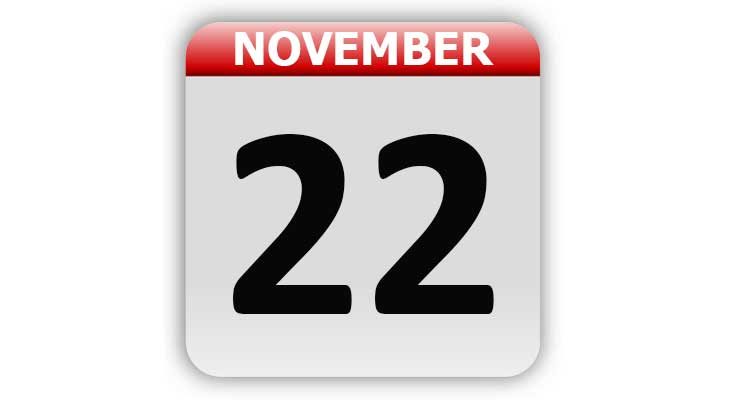 1718 – Off the coast of North Carolina, British pirate Edward Teach, best known as “Blackbeard”, was killed in battle with a boarding party led by Royal Navy Lieutenant Robert Maynard.

1906 – The International Radio Telegraphic Convention in Berlin adopted the SOS distress signal that means “Save Our Souls.”

1917– The National Hockey League was officially formed in Montreal, Canada.

1927 – A patent was issued for the motor toboggan. We know it now as a snowmobile.

1935 – The first trans-Pacific airmail flight began in Alameda, CA, when the flying boat known as the China Clipper left for Manila. The craft was carrying over 110,000 pieces of mail.

1954 – The Humane Society of the United States was founded.

1963 – President John F. Kennedy was assassinated while riding in a motorcade in Dallas, TX. Texas Governor John B. Connally was also seriously wounded. Vice-President Lyndon B. Johnson was inaugurated as the 36th President of the United States. Suspect Lee Harvey Oswald was later captured and charged with the murder of both the President and police officer J. D. Tippit. Oswald was shot dead two days later by Jack Ruby while in police custody.

1968 – The Beatles only double album — “The Beatles” — was released. It is more commonly referred to as “The White Album”.

1975 – “Dr. Zhivago” appeared on TV for the first time. NBC paid $4 million for the broadcast rights.

1975 – The first ever MHSSA state final football games were played in Michigan.

1978 – Amway purchased the now Amway Grand Plaza Hotel. The 12-story u-shaped building was first erected in 1913 as the Pantlind Hotel.

1984 – Fred Rogers of PBS television show “Mr. Rogers’ Neighborhood” presented one of his signature sweaters to the Smithsonian Institution.

1985 – 38,648 immigrants became citizens of the United States. It was the largest swearing-in ceremony.

1986 – Attorney General Edwin Meese’s office discovered a memo in Colonel Oliver North’s office that included an amount of money to be sent to the Contras from the profits of weapons sales to Iran.

1986 – Mike Tyson became the youngest to wear the world heavyweight-boxing crown. He was only 20 years and 4 months old.

1988 – In Palmdale, CA, the first prototype B-2 Spirit stealth bomber was revealed.

1991 – Disney’s animated film “Beauty and the Beast” debuted in theaters.

1993 – Five former security guards at Michael Jackson’s Neverland ranch sued him. They claimed they were dismissed because they knew too much about his illicit activities with young boys.

1996 – The Christmas movie “Jingle All the Way”, starring Sinbad and Arnold Schwarzenegger, premiered in theaters.

1998 – The CBS television show “60 Minutes” aired a tape of Jack Kevorkian giving lethal drugs in an assisted suicide of a terminally ill patient. Kevorkian was later sentenced to 25 years in prison for second-degree murder in the case.

2004 – Ozzy and Sharon Osbourne had almost two-million-dollars in jewelry stolen from their mansion in England.

2013 – The discovery of Siats meekerorum was announced. The dinosaur skeleton, more than 30 feet long, was found in eastern Utah.

Go For A Ride Day

Tags: A Look Back, Celebrity Birthdays, Days of the Year, November 22, Today in History