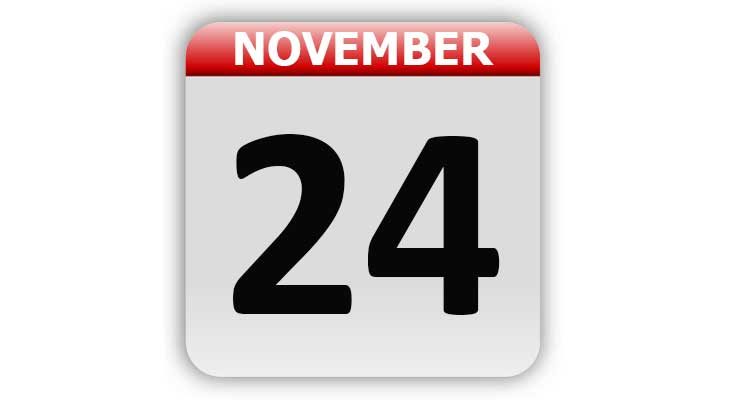 1859 – Charles Darwin’s “On the Origin of Species” was published.

1871 – The National Rifle Association was incorporated in the United States .

1874 – Joseph F. Glidden was granted a patent for a barbed fencing material.

1903 – Clyde J. Coleman received the patent for an electric self-starter for an automobile.

1963 – In what would become the first live, televised murder, Lee Harvey Oswald, the alleged assassin of President John F. Kennedy was murdered two days after the assassination, by Jack Ruby in the basement of the police department headquarters in Dallas, TX.

1969 – Apollo 12 landed safely in the Pacific Ocean bringing an end to the second manned mission to land on the moon.

1971 – During a severe thunderstorm over Washington state, a hijacker calling himself Dan Cooper (aka D.B. Cooper) parachuted from a Northwest Orient Airlines plane with $200,000 in ransom money. He was never found — dead or alive.

1993 – The U.S. Congress gave its final approval to the Brady handgun control bill.

1996 – Rusty Wallace won the first NASCAR event to be held in Japan.

1996 – Barry Sanders, of the Detroit Lions, set an NFL record when he recorded his eighth straight 1,000-yard season.

1998 – AOL (America Online) announced a deal for their purchase of Netscape for $4.21 billion.

2000 – The Supreme Court stepped into the bitter presidential election mess and agreed to consider George W. Bush’s appeal against the hand recounting of ballots in Florida.

2012 – The music video “Gangnam Style” become the most viewed video on YouTube. It was the first video to hit one billion views.

Tags: A Look Back, Celebrity Birthdays, Days of the Year, November 24, Today in History