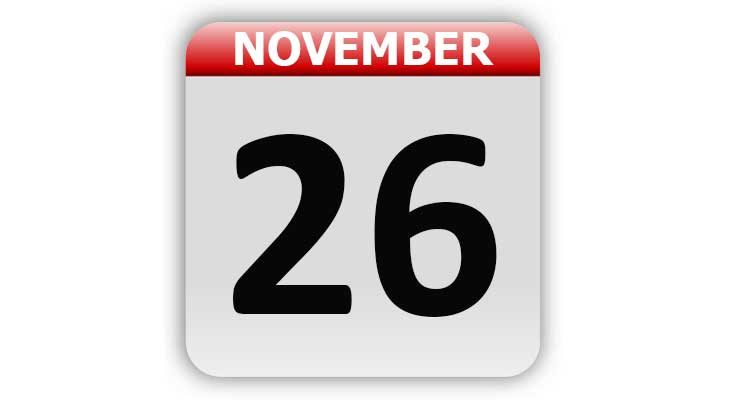 1716 – The first lion to be exhibited in America went on display in Boston, MA.

1789 – A national Thanksgiving Day was observed in the U.S. as proclaimed by President George Washington at the request of Congress.

1842 – The University of Notre Dame was founded.

1863 – After a 40 year effort begun by Boston journalist Sarah Hale, President Abraham Lincoln established Thanksgiving as a national holiday, falling on the last Thursday in November. (Since 1941, it has been on the fourth Thursday.)

1922 – In Egypt, the entrance to child-king Tutankhamen’s tomb was discovered by archaeologist Howard Carter and Lord Carnarvon.

1965 – France became the third country to enter space when it launched its first satellite the Diamant-A.

1973 – Rose Mary Woods, President Richard Nixon’s personal secretary, told a federal court that she was responsible for the 18 1/2 minute gap in a key Watergate tape.

1975 – Lynette “Squeaky” Fromme, a member of the Manson Family, was found guilty of trying to assassinate President Gerald R. Ford on September 5th.

1979 – The International Olympic Committee voted to re-admit China after a 21-year absence.

1983 – A Brinks vault in London’s Heathrow Airport was robbed by gunmen, who made off with 6,800 gold bars worth nearly $40 million. Only a fraction of the gold has ever been recovered and only two men were convicted in the heist.

1990 – The Delta II rocket made its maiden flight.

1995 – Two men set fire to a subway token booth in the Brooklyn borough of New York City. The clerk inside was fatally burned.

1998 – Hulk Hogan announced that he was retiring from pro wrestling and would run for President in 2000.

2000 – Florida Secretary of State Katherine Harris certified George W. Bush the winner over Al Gore in the state’s hotly contested Presidential balloting by 537 votes. Bush went on to win the Presidential election, despite losing in the national popular vote.

2001 – An minor earthquake was centered at Scotts, MI.

2003 – The Concorde made its final flight, over Bristol, England.

2010 – Willie Nelson was arrested at a border patrol checkpoint in Sierra Blanca, TX and charged with possession of six ounces of marijuana. He was taken to jail and released on $2,500 bail.

2010 – The movie “The Kings Speech” debuted in theaters. It would win Academy Awards for Best Picture, Best Director and Best Actor,

2018 – The robotic probe Insight landed on the planet Mars.

Tags: A Look Back, Celebrity Birthdays, Days of the Year, November 26, Today in History