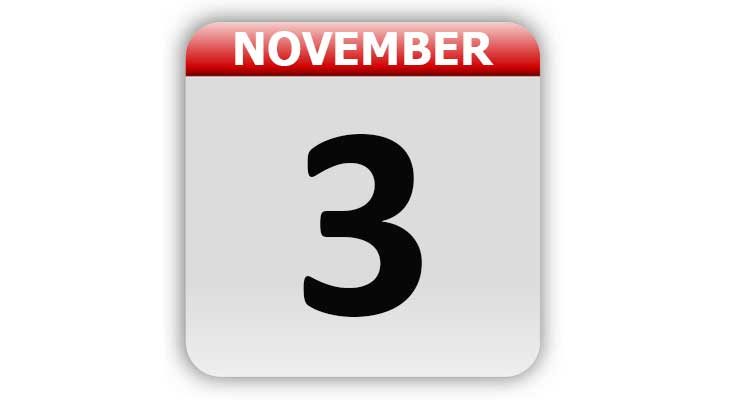 1507 – Leonardo DaVinci was commissioned by the husband of Lisa Gherardini to paint her. The work is known as the Mona Lisa.

1796 – John Adams was elected the 2nd President of the United States.

1892 – The first automatic telephone went into service at LaPorte, IN. The device was invented by Almon Strowger.

1906 – “S.O.S.” was officially adopted as the international Morse Code distress signal after being established at the International Radiotelegraph Convention in Berlin

1908 – William Howard Taft was elected as the 27th President of the United States.

1936 – Franklin D. Roosevelt was re-elected President of the United States.

1952 – Frozen bread was offered for sale for the first time in a supermarket in Chester, NY.

1953 – The Rules Committee of organized baseball restored the sacrifice fly. The rule had not been used since 1939.

1954 – The first “Godzilla” film was released and marked the first appearance of the character.

1956 – The movie “The Wizard of Oz” was first broadcast on television.

1957 – Sputnik II was launched by the Soviet Union. It was the second man-made satellite to be put into orbit. On board was the first animal to enter orbit — a dog named Laika.

1964 – Washington, DC, residents were able to vote in a Presidential election for the first time.

1969 – Mary Stiles and two companions tried to stop the further demolition of the old Grand Rapids City Hall building. Mary’s two friends climbed the tower of the abandoned building and rang the old city fire bell and Mary chained herself to the wrecking ball. She was later cut off and arrested, and the demolition when on as scheduled.

1973 – NASA launched the Mariner 10 spacecraft toward Mercury. On March 29, 1974 it became the first space probe to reach that planet.

1992 – The song “I Will Always Love You”, recorded by Whitney Houston, was released. The song went on to become the best selling single in history created by a woman. The song was originally written and recorded by Dolly Parton.

1994 – Susan Smith of Union, SC, was arrested for drowning her two sons. Nine days earlier she claimed that the children had been abducted by a black carjacker.

1995 – President Bill Clinton dedicated a memorial at Arlington National Cemetery to the 270 victims of the bombing of Pan Am Flight 103.

1998 – Minnesota elected Jesse “The Body” Ventura, a former pro wrestler, as its governor.

2016 – The Chicago Cubs defeated the Cleveland Indians in Game 7 of the 2016 World Series to earn their first title in 108 years, ending the longest title drought in U.S. sports history.

Tags: A Look Back, Celebrity Birthdays, Days of the Year, November 3, Today in History