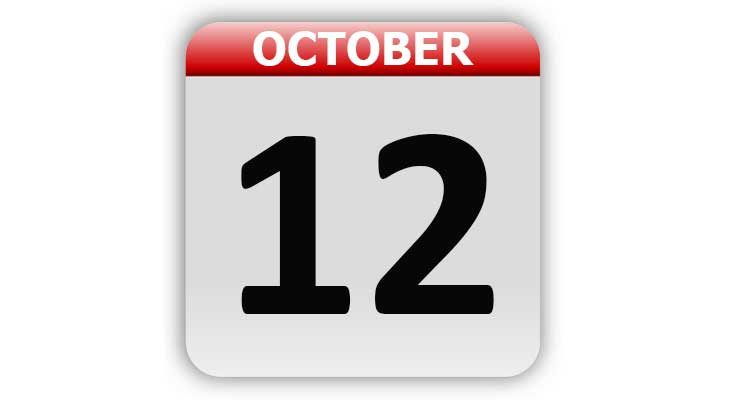 1792 – The first celebration of Columbus Day was held in New York, NY.

1892 – The Pledge of Allegiance was first recited by students in many U.S. public schools, as part of a celebration marking the 400th anniversary of Christopher Columbus’ voyage.

1928 – An iron lung respirator was used for the first time at Children’s Hospital in Boston, MA.

1933 – The U.S. Department of Justice acquired Alcatraz Island from the U.S. Army.

1973 – Gerald R. Ford was nominated to replace Spiro Agnew as Vice President of the United States.

1979 – “The Hitchhiker’s Guide to the Galaxy”, the first of five books in the comedy science fiction series by Douglas Adams was published.

1983 – Karen Carpenter received a star on the Hollywood Walk of Fame.

1989 – The House of Representatives approved a statutory federal ban against destroying the American flag.

1994 – NASA lost radio contact with the Magellan spacecraft as the probe descended into the thick atmosphere of Venus.

1998 – Matthew Shephard, a gay student at the University of Wyoming, died five days after he was beaten, robbed and left tied to a wooded fence post outside of Laramie, WY.

1998 – The U.S. House of Representatives passed the Online Copyright Bill.

1999 – Rob Reiner received a star on the Hollywood Walk of Fame.

2000 – The U.S.S. Cole was badly damaged in Aden, Yemen, by two suicide bombers. The blast killed 17 crew members and wounded at least 39.

2001 – Responding to a request by President George W. Bush, “America’s Most Wanted” aired a special episode about terrorists.

2005 – It was announced that Daniel Craig would become the sixth “James Bond.”

2019 – The Hard Rock Hotel in New Orleans, LA, which was under construction, collapsed, killing two and injuring 20.

Tags: A Look Back, Celebrity Birthdays, Days of the Year, October 12, Today in History