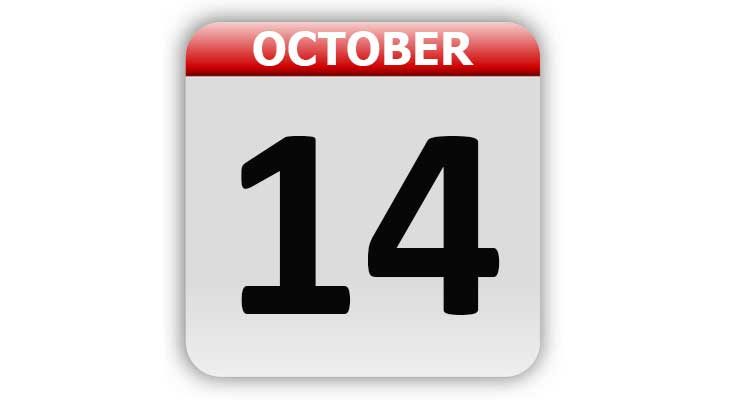 1887 – Thomas Edison and George E. Gouraud reached an agreement for the international marketing rights for the phonograph.

1912 – Theodore Roosevelt was shot while campaigning in Milwaukee, WI. Roosevelt’s wound in the chest was not serious. With the fresh wound in his chest, and the bullet still inside, he continued with his planned speech. The shooter, William Schrenk, was captured at the scene.

1943 – The Radio Corporation of America finalized the sale of the NBC Blue radio network. Edward J. Noble paid $8 million for the network that was renamed American Broadcasting Company.

1968 – The first live television broadcast, by American astronauts in orbit, was transmitted by the Apollo 7 crew.

1972 – In Iraq, oil was struck for the first time just north of Kirkuk.

1977 – Anita Bryant had a pie thrown in her face at a news conference in Des Moines, IA, by gay rights activist Tom Higgins for her anti-LGBT commentary.

1998 – Eric Rudolph was charged with six bombings, including the 1996 Centennial Olympic Park bombing in Atlanta, GA.

2000 – A lawsuit was filed against Don Henley in Little Rock, AR. The suit claimed that a fan was hit in the forehead with a maraca during on October 4, 2000 concert.

2001 – Toys “R” Us introduced the new version of Geoffrey the giraffe in a 60-second commercial.

2003 – Chicago Cubs fan Steve Bartman became known as the scapegoat for the Cubs losing Game 6 of the 2003 National League Championship Series to the Florida Marlins when he reached over the outfield wall to catch a fly ball.

2007 – The TV show “Keeping Up with the Kardashians” debuted on the E! cable network.

2012 – Felix Baumgartner successfully jumped to Earth from a helium balloon in the stratosphere in the Red Bull Stratos project.

Be Bald and Be Free Day

Tags: A Look Back, Celebrity Birthdays, Days of the Year, October 14, Today in History