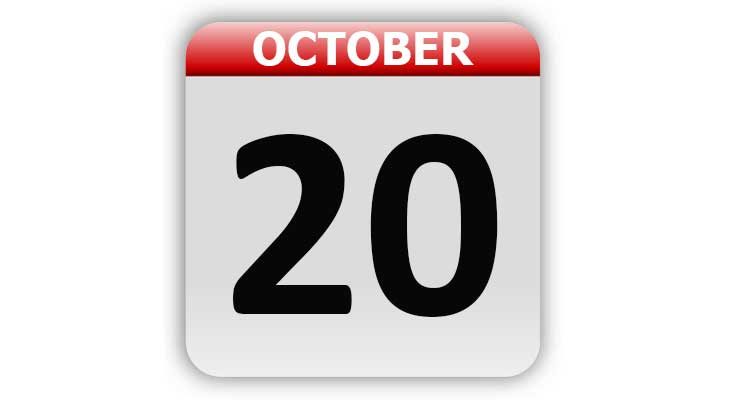 1818 – The boundary between the United States and Canada was defined as the 49th parallel.

1879 – Thomas A. Edison invented a workable electric light in his laboratory in Menlo Park, NJ.

1910 – For the first time in a World Series game, a baseball with a cork center was used.

1913 – Camel cigarettes were introduced for the first time.

1917 – American troops saw action in World War I for the first time.

1967 – In Northern California, two men along the Bluff Creek, filmed 59 seconds of what they claimed to be Bigfoot.

1973 – The Sydney Opera House in Australia was opened after 14 years of construction.

1993 – Attorney General Janet Reno warned the TV industry to limit the violence in their programs.

1997 – President Bill Clinton’s administration endorsed a revised Republican bill to restructure the Internal Revenue Services and shifted the burden of proof from the taxpayer to the government in contested court cases.

1998 – A Florida judge issued a warrant for the arrest of Bobby Brown after the singer violated his probation by showing up drunk and high to begin serving a five-day sentence for drunk driving.

2001 – Paul McCartney, Eric Clapton, The Who, Mick Jagger and Keith Richards, Bon Jovi, Goo Goo Dolls, Elton John, Five for Fighting, John Mellencamp and others performed at the six-hour Concert for New York City at Madison Square Garden. More than five-thousand police officers and firemen attended the benefit for the families of police and firemen killed on September 11th.

2003 – A 40-year-old Michigan man went over Niagara Falls without safety devices and survived. Kirk Jones, an unemployed 40 year old became the first person to survive going over the falls without protection. He was charged with illegally performing a stunt. He drank vodka and Coke before he jumped into the Canadian Horseshoe Falls. He was fined $2,2600, barred from Niagara Park for a year, and ordered to pay $1,600 to make up for the 45 minutes the tourist attraction was closed to the public following the stunt. Sadly, his body was discovered on June 2, 2017 in the Niagara River, about 12 miles from the falls. It appeared he had tried going over the falls again.

2003 – The D.C. sniper trial opened in Virginia. John A. Muhammad served as his own defense.

Get to Know Your Customers Day

National Get Smart About Credit Day

Tags: A Look Back, Celebrity Birthdays, Days of the Year, October 20, Today in History