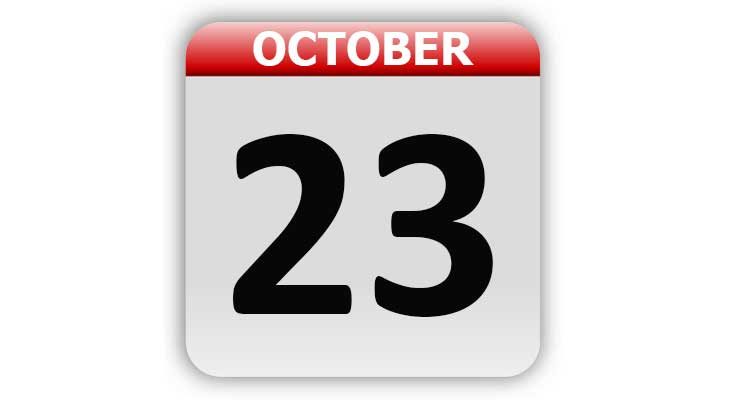 1929 – After a steady decline in stock market prices since a peak in September, the New York Stock Exchange began to show signs of panic.

1956 – NBC broadcast the first videotape recording. A tape of Jonathan Winters was seen coast to coast in the U.S.

1965 – The last steam operating locomotive in Michigan (owned by the Canadian National Railroad) traveled from Durand to Detroit on its final run.

1987 – The Senate rejected the nomination of Robert Bork to the Supreme Court by a vote of 58-42.

1996 – The wrongful death suit of O.J. Simpson went to trial in Santa Monica, CA. (Simpson was found liable in the deaths of his ex-wife Nicole and Ronald Goldman.)

1999 – During a training flight, Harrison Ford crash-landed his helicopter about 60 miles outside of Los Angeles, CA. No one was injured.

2001 – A 2.9 magnitude earthquake was centered near Prairie Lake, MI — north of Albion, in Calhoun County.

2004 – Ashlee Simpson made an infamous lip-syncing gaffe on TV’s “Saturday Night Live”. A technical snafu caught her off mic when “Pieces of Me,” complete with vocals, began playing. She ran offstage after a half-hearted jig and later blamed the goof on her band and then on her “acid reflux.”

2012 – The twenty-third James Bond film, “Skyfall “, premiered in theaters, starring Daniel Craig in the lead role. The movie made over a billion dollars at the box office.

Tags: A Look Back, Celebrity Birthdays, Days of the Year, October 23, Today in History