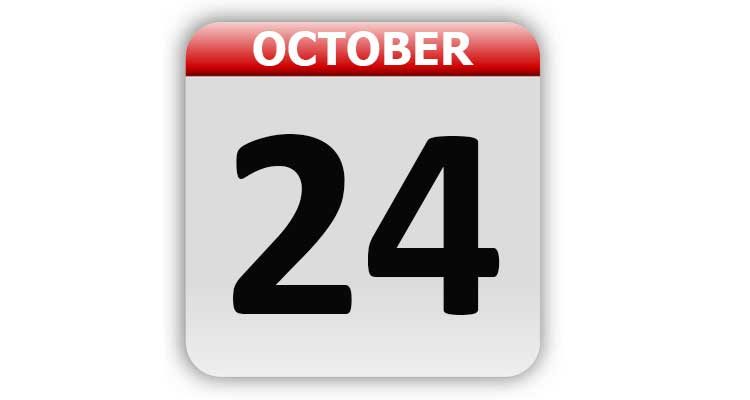 1901 – Daredevil and Michigan school teacher Anna Edson Taylor became the first person to go over Niagara Falls in a wooden barrel. She did this on her 63rd birthday.

1911 – Orville Wright remained in the air for 9 minutes and 45 seconds in a Wright Glider at Kill Devils Hills, NC.

1926 – Harry Houdini’s last performance, which was at the Garrick Theater in Detroit, MI. He would die a week later due to complications with appendicitis.

1931 – The upper level of the George Washington Bridge opened for traffic between New York and New Jersey. Today, it is the world’s busiest motor vehicle bridge.

1939 – Nylon stockings went on sale for the first time in Wilmington, DE.

1945 – The United Nations was formally established less than a month after the end of World War II.

1949 – The cornerstone for the United Nations Headquarters was laid in New York, NY.

1969 – The movie “Butch Cassidy and the Sundance Kid” premiered in theaters.

1977 – Veterans Day was observed on the fourth Monday in October for the seventh and last time. The holiday was moved to November 11 the following year.

1989 – Disgraced televangelist Jim Bakker was sentenced to 50 years in prison for fraud.

1997 – In Arlington, VA, sportscaster Marv Albert was spared a jail sentence after he made a courtroom apology to the woman he bit during sex.

2003 – In London, three Concorde jets touched down for the last time at Heathrow Airport, marking an end to commercial supersonic travel.

2005 – Hurricane Wilma made landfall in Florida, causing 61 deaths and over $20 billion in damage.

2008 – Jennifer Hudson’s mother and older brother were murdered at her mother’s home in Chicago, IL. An Amber Alert was issued for her missing eight-year-old nephew Julian. (His body was discovered three days later. Hudson’s brother-in-law was later convicted of the murders.)

Tags: A Look Back, Celebrity Birthdays, Days of the Year, October 24, Today in History