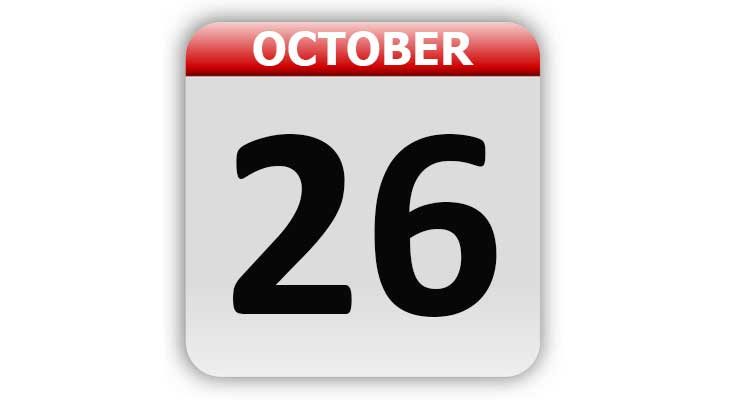 1774 – The First Continental Congress of the United States adjourned in Philadelphia, PA.

1854 – Charles William Post was born. He was the inventor of “Grape Nuts,” “Postum” and “Post Toasties” cereals.

1858 – The rotary motion washing machine was patented by H.E. Smith

1881 – The “Gunfight at the OK Corral” took place in Tombstone, AZ. The fight was between Wyatt Earp, his two brothers and Doc Holiday and the Ike Clanton Gang.

1970 – “Doonesbury”, the comic strip by Gary Trudeau, premiered in 28 newspapers across the U.S. Mel Lazarus’s “Momma” also debuted on this day.

1980 – The video arcade game “Pacman” was released in the United States. It was originally going to be called “Puck Man”.

1984 – The movie “The Terminator”, starring Arnold Schwarzenegger, debuted in theaters.

1984 – “Baby Fae” was given the heart of baboon after being born with a severe heart defect. She lived for 21 days with the animal heart.

1988 – Two whales were freed by Soviet and American icebreakers. The whales had been trapped for nearly 3 weeks in an Arctic ice pack.

1996 – Federal prosecutors cleared Richard Jewell as a suspect in the Olympic park bombing.

1998 – A U.S. federal judge refused to issue an injunction against the sale of MP3 players. The device is used to play music downloaded from the Internet. The Recording Industry Association of America had brought the case to court.

2001 – It was announced that Fort Worth’s Lockheed Martin won a defense contract for $200 billion over 40 years. The contract, for the “joint strike fighter,” was the largest defense contract in history.

Howl at the Moon Day

National Day of the Deployed

Tags: A Look Back, Celebrity Birthdays, Days of the Year, October 26, Today in History