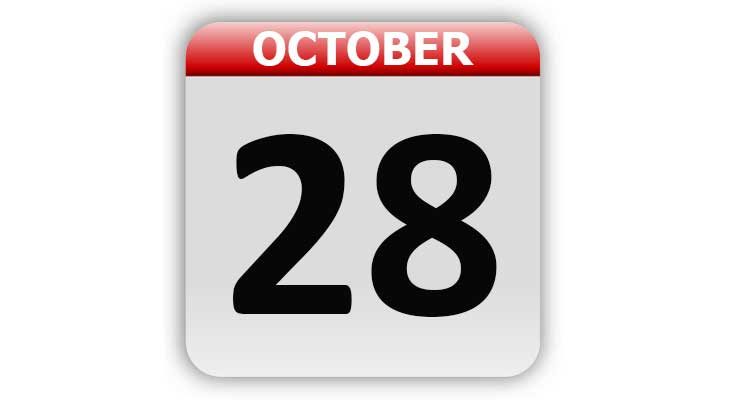 1636 – Harvard College was founded in Massachusetts. The original name was Court of Massachusetts Bay Colony. It was the first school of higher education in America.

1793 – Eli Whitney applied for a patent for his cotton gin.

1886 – The Statue of Liberty, a gift from the people of France, was dedicated in New York Harbor by President Grover Cleveland in the presence of it’s sculptor, Frederic Auguste Bartholdi. She’s a big girl! The statue weighs 225 tons and is 152 feet tall. It was originally known as “Liberty Enlightening the World.”

1904 – The St. Louis Police Department became the first to use fingerprinting.

1919 – The U.S. Congress enacted the Volstead Act, also known as the National Prohibition Act, over President Woodrow Wilson’s veto. Prohibition began the following January but was repealed in 1933 with the passing of the 21st Amendment to the U.S. Constitution.

1922 – The first coast-to-coast radio broadcast of a football game.

1936 – The Statue of Liberty was rededicated by President Theodore Roosevelt on its 50th anniversary.

1942 – The Alaska Highway (Alcan Highway) was completed through Canada to Fairbanks, AK.

1949 – President Harry Truman swore in Eugenie Moore Anderson as the U.S. Ambassador to Denmark. Anderson was the first woman to hold the post of Ambassador.

1956 – Elvis Presley received a polio vaccination on national TV. This single event was credited with raising immunization levels in the U.S. from 0.6% to over 80% in just six months.

2001 – Families of people killed in the September 11 terrorist attack gathered in New York, NY, for a memorial service.

2001 – The movie, “Monsters, Inc.”, produced by Pixar Animation Studios and distributed by Walt Disney Pictures, premiered in theaters. It featured the voices of John Goodman and Billy Crystal,

2009 – “This Is It”, a documentary of the rehearsals for Michael Jackson’s doomed London comeback concerts, opened in theaters. It went on to become the highest-grossing documentary of all time.

Alf – 266 years old (1756) – The popular alien character from the TV show “Alf”. He was born on the Lower East Side of the planet Melmac. Melmac was located six parsecs past the Hydra-Centaurus Supercluster, and had a green sky, blue grass and a purple sun.

Jane Alexander – 83 years old (1939) – Actress, former director of the National Endowment for the Arts (“The Great White Hope”, “All the President’s Men”, “Kramer vs Kramer”, “Testament”)

Tags: A Look Back, Celebrity Birthdays, Days of the Year, October 28, Today in History