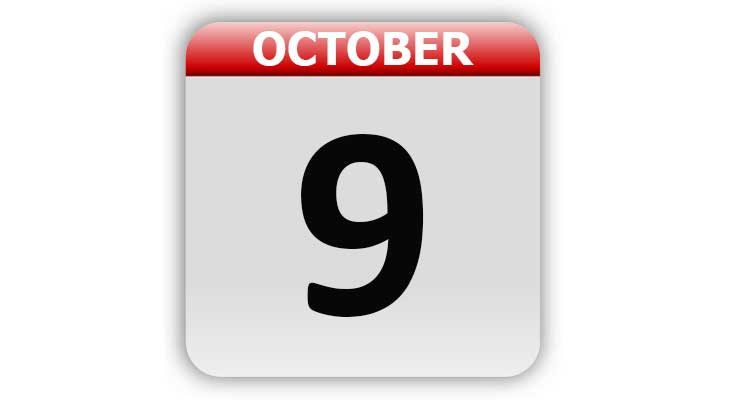 1701 – The Collegiate School of Connecticut was chartered in New Haven. The name was later changed to Yale.

1855 – Joshua C. Stoddard received a patent for his calliope.

1876 – Alexander Graham Bell and Thomas Watson made their longest telephone call to date. It was a distance of two miles.

1888 – The Washington Monument was officially opened to the public.

1919 – The Cincinnati Reds won the World Series. The win would be later tainted when eight Chicago White Sox were charged with throwing the game. The incident became known as the “Black Sox” scandal.

1930 – After landing in Glendale, CA, aviator Laura Ingalls completed the first solo transcontinental flight across the U.S. by a woman

1946 – The first electric blanket went on sale in Petersburg, VA.

1969 – In Chicago, IL, the National Guard was called in for crowd control when demonstrations continued in connection with the trial of the “Chicago Eight” that began on September 24th.

1985 – A 2½ acre garden memorial was dedicated to John Lennon by his widow Yoko Ono. The memorial was located in New York City’s Central Park is called Strawberry Fields.

1986 – Joan Rivers debuted on her own late night television talk show “The Late Show” on FOX.

1995 – An Amtrak Sunset Limited train was derailed by saboteurs near Palo Verde, AZ. One person was killed and a hundred were injured.

2000 – Brett Hull, of the Dallas Stars, scored his 611th National Hockey League goal. The goal allowed him to pass his father, Bobby Hull, on the all time scoring list bringing him to number 9.

2003 – The ride “Mission: Space” opened to the public in Epcot at Walt Disney World in Orlando, FL. The opening ceremony included several astronauts from all eras of space exploration.

2003 – Britain’s Queen Elizabeth II knighted Roger Moore and made Sting a Commander of the British Empire.

2009 – NASA launched the Lunar Crater Observation and Sensing Satellite (LCROSS). On November 13, it was announced that water had been discovered in the planned impact plume on the moon.

2012 – Jerry Sandusky, the disgraced Penn State football coach, was sentenced to 30 to 60 years in prison for molesting young boys.

Tags: A Look Back, Celebrity Birthdays, Days of the Year, October 9, Today in History