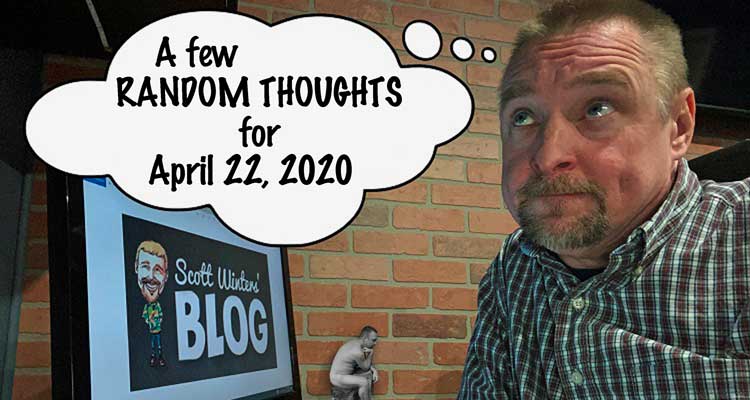 April 22nd and it’s still snowing! What an unbelievable year this has been so far. Here are today’s “Random Thoughts”…

According to the website put together by the Michigan Department of Health and Human Services, as of Tuesday afternoon at 3 pm there are 32,967 confirmed cases of COVID-19 in the state of Michigan. That number jumped up by 967 in 24 hours.

They are now also giving us the Cumulative Total of Recovered COVID-19 Cases. They will update this number every Saturday. As of April 18th, 3,237 have recovered from the virus.

A few more cancellations due to the Coronavirus…

The National Spelling Bee has now been cancelled. It will not be held this year. Also not happening as scheduled are Germany’s Oktoberfest and Spain’s Running of the Bulls.

I have been saying for a few weeks now, that I have been fortunate not to know anyone who has tested positive, or died from, the Coronavirus.

If you listened to WKLQ back in the early 90’s you may remember one of our air staff members named Darrin Arriens. I received word that he has died following a lengthy battle with complications stemming from COVID-19. He was 52.

After KLQ, Darrin had worked at programming stations across the country. He returned to the area in around 2008 to program WLAV.

You can read more about Darrin’s career here.

THE GOVERNOR TAKES A PAY CUT — SHOULD WE BE IMPRESSED?

Our Governor Gretchen Whitmer announced the other day that she is taking a 10% pay cut due to the COVID-19 pandemic. Are you impressed?

I’m a numbers guy, so I ran the math on this to see just what this means for her.

Now I don’t know about you, but personally I am losing more than $306 dollars a week because of the situation. I don’t make anywhere near what the Governor earns, but with Real Estate being deemed a “non-essential” business, I am losing about 2/3rds of my monthly income. Way more than her $1,225.40 monthly pay cut.

I also know others that have lost their jobs completely or just can’t work. They are losing probably even more than I am. So for someone who has lost all or more than half of their income — should we be impressed by her 10% pay reduction which comes down to just over $300 a week?

If she really wants to impress me, take a pay cut at a similar percentage rate that the rest of us are having to deal with. Now I know one could argue there is unemployment benefits, but many are frustrated by that whole process and haven’t seen a dime yet. Also, people with more than one job (like me), probably won’t get much in unemployment if they still have some income coming in. People like me will just have to deal with a 65% cut in pay per month. Or dear Governor, do what the Governor of Illinois is doing and don’t take a salary. Or, follow the example of our former Governor Rick Snyder who only took a $1 yearly salary.

It’s sometimes weird how when you listen to the lyrics of songs from the past, they really sum up what is happening in our every day life.

Such is the case for the Styx song “Best of Times”.

Dennis DeYoung recently performed the song from his home…

He still has the voice!

HOW WE ALL FEEL SOME DAYS

Sometimes we just need to get out and let loose of our frustration!

Today is the 50th anniversary of the very first Earth Day.

Normally I could say “Go Plant a Tree” to celebrate, but not this year. That is not allowed.